What happens when you take a pretty good plot for a standard 16 episode drama and try to pull it apart like taffy into a drawn out short format series that goes on for 40 long (yet annoyingly short and empty) episodes?  You ruin a perfectly good show, that’s what happens.  Can we just stop making these 35 minute format shows?  They’re so annoying!  This drama was just a big mess – and I blame the formatting for 90% of the problem.

The cast was stellar and had great chemistry – all of them – though it felt more like “playing” than “acting”… as if they were all enjoying a nice vacation from serious work for a while and just goofing off for an easy paycheck.  So it wasn’t an unpleasant waste of my time – I enjoyed watching them enjoy themselves, I guess.  I am a huge Ji Chang-Wook fan, but this role required very little of him.  He just had to show up, basically, and be adorable… which he can do in his sleep, I imagine.  Sigh.  I was all on board seeing him in a romantic comedy, but this drama did nothing but frustrate me.

With the exception of the villain, played to absolute perfection by Dong Ha (someone just give him an award immediately, cause he brought his acting chops to the table while everyone else came empty handed). 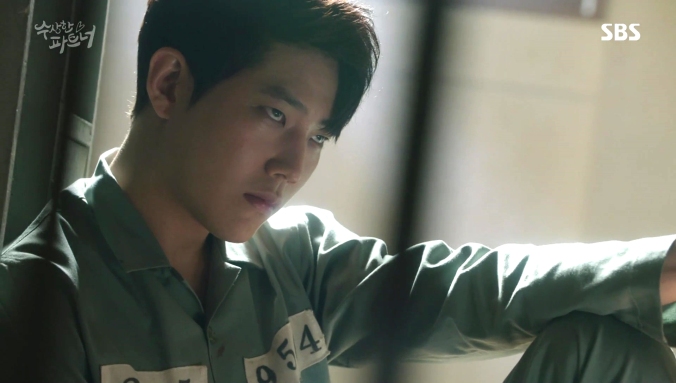 I’m too annoyed to even review the plot.  It’s basically about lawyers and prosecutors and the challenge of trying to determine the guilt and innocence of people when all these external and internal factors are messing with the evidence  (watch Remember, if you want a damned fine drama on this subject).  The two main leads fall in love, so lots of cutesy flirting and kissing.  Everyone is charming and cute, but other than that… there’s not a lot going on with their characters.  As mentioned, the only character who really mesmerized me was the villain – and the cool plot twist at the end could not save this long, rambling story line or this show.  The biggest surprise was that I actually watched the whole show – in chunks, over the past few weeks.  If I had tried to watch it sequentially, I probably would have abandoned it in frustration long ago.