Decided to read a fun fantasy romance novel today – about a renegade witch who finds herself married to a witch hunter. The novel is told from alternating points of view – between our mismatched lovers – and overall it was a highly enjoyable tale of medieval lore, mystery, and (most of all) love.

I am a sucker for a wild girl paired with a prudish guy, what can I say? And I especially enjoy cohabitation stories where the couple is either married but not “together” or pretending to be married but not “together.” All that “oh my, wherever shall I sleep? On the floor? The couch? Should we share a bed and put pillows between us? Decisions, decisions…” it never gets old to me. There was a surprisingly detailed sex scene too (I believe the expression ‘to the hilt’ was used, as cringe worthy as ever). 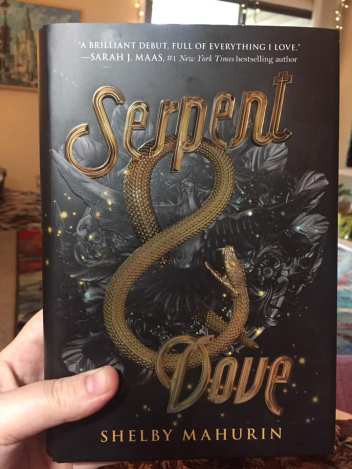 Serpent & Dove has a nice dusting of French throughout, adding a little foreign flavor to our fantasy world.  There’s loads of fun characters coming in and out of the scenes, from apprentices to courtesans, witches to royals, and bakers to scorned aristocracy. And we’re also given a nice dose of feminism as well as plea for deeper understanding between all people we’ve labeled as “other” for various reasons. It was nicely done. For a debut novel, it was rich in detail and showed clear evidence of expert writing and editing, keeping the flow steady and enjoyable throughout.

I really liked it.

My only complaint was the tale was set in this historical world with corsets and daggers and metal bath tubs… but it kept throwing in modern language stylings, with our female witch in particular. I don’t mind cursing or vulgarity, those are not particular to any time period, but the turn of phrases, the expressions, the slang… it was 21st Century. And it always, always threw me out of the story setting. If she was going to write this way, the author should have just made our witch a time traveler. Everyone else is all proper and our witch is slinging punchy jokes and contemporary witticisms.

I don’t know if it will bother others as much as it bothered me… and honestly, that’s my only complaint for an otherwise enjoyable rompish fantasy-romance. Oh, and it’s set up for a sequel… with a nice twist or two at the end to leave us wanting more. There were several sets of magical creatures referred to that I would love to see explored in more detail in future books.

I’ll definitely be buying the next installment.