Oh, what to say, what to say?  It was… tolerable.  A story about a bullied girl who gets into an accident, loses her memory, gets mistaken for another girl, who also got into an accident, and gets to suddenly live a new life as a pampered rich girl at a fancier school.  It’s just one dumb plot device after another.  Secret twins!  Near Death Experiences!  Amnesia!  Imposters!  Generic Love Triangle!  It still managed to be slightly enjoyable though.  The cast was solid, the cruelty and kindness of teenagers adding drama to each episode.  But overall, I wouldn’t recommend it.  Watch School 2013.  It’s better.

Nam Joo-Hyuk proves he’s got leading male capabilities.  Kim So-Hyun beguiles us with her big eyes and expressive face.  And Yook Sung-Jae gets pushed to the side in the generic role of second male lead.  I really enjoy Yook Sung-Jae, but have yet to decide if he’s strong enough to pull off a lead in a drama of his own yet.  He’s a bit too idol for me, a bit too hammy, a bit too adorable.  Super adorable as a blonde.

Our second female lead, however, is amazing.  The bully.  The villain.  She’ll never want for work.  When she’s old enough, she can easily migrate into the “evil mom,” “evil boss,” and “evil ex” roles.  She delivered some blood curdling coldness.  Jo Soo-Hyang is amazing, but I’m not delusional enough to expect her in leading female roles… she’s lovely, but the beauty standards of South Korea are as strict as Hollywood’s.  And that’s a whole other post.

Could I love this drama any more?  It had all the tropes that I adore:  A man haunted by his past, awkward and childlike in love – a zany cast of misfits trying to carve out their niche – interesting, complicated parents – and psycho antagonists who are strangely lovable.  Add to that some quality writing that kept me glued to the screen every episode, and you’ve got a recipe for a quality romantic drama.

More – including spoilers, one complaint, and character discussions follow:

END_OF_DOCUMENT_TOKEN_TO_BE_REPLACED

What a fun little slice of a dark morality play!  This show reminds of me of an anime, in a way, as anime’s have always been more eager to jump into the horror genre.  It also reminded me of an anime in that it was fairly simplistic.  You won’t get the usual character development, home life, tropes and heightened emotions generally found in a Korean drama.  This show stays pretty even layered in its thin but satisfying story about a classroom of high school students who end up with a new teacher… who grants them their wishes and watches as they sabotage themselves with their desires.  The kids start out with good intentions, but greed and revenge and personal gain always get the best of them… and things go sour.  One after the other, they start to disappear, trapped in a nightmare of their own making.

Nightmare Teacher was exactly what it said it was going to be and delivered fun little examinations into the darker side of young adulthood.  Kids can be cruel.  Just like a prison system, a high school has its own rules and regulations and inmate behaviors that are common and often “overlooked” by adults and even other kids.  That’s just the way things are, they shrug.  And kids can also be kind, and watch each others backs and do the right thing and step up when needed.  This show examines the balance between good and evil, and how both sides of the coin are apart of us all. 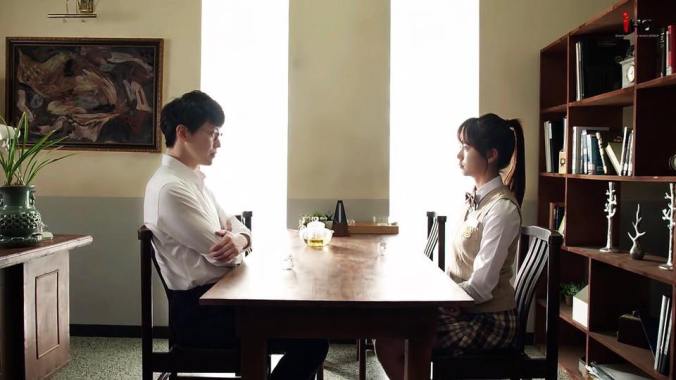 Uhm Ki-Joon was delightful as the unassuming face of evil (or was he?).  And Kim So-Hyun was wonderful as his antagonist, the bright student who plays it safe.  It’s not deep, mind you.  Just a quick and simple little exploratory adventure into a dark fairy tale that’s a short and pleasant way to pass the time.

I was on a Do Kyung-Soo kick… or maybe just a crying kick, I’m not sure… but I ended up watching two Do Kyung-Soo tearjerkers back to back yesterday.  They were both lovely films – full of outstanding performances from all the actors involved.  Pure Love was a story about a group of teenage friends who are home for the summer in 1991, enjoying their beautiful coastal village and the pains and joys of growing up.  One of the girl’s has a genetic problem with her legs and struggles to walk – while secretly hoping for an operation that will cure her.  The boys in the group all love her, in their own ways, but in particular one sensitive young man who follows her around like a lost puppy.  It’s a gorgeous film… a thoughtful, nostalgic piece about youth and also about the betrayal of coming of age.  I ain’t gonna lie… I cried.  A lot.  They really did not intend for anyone to leave this movie with dry eyes and I’m sure succeeded…. cause a lot of it tore my heart out.

My Annoying Brother was, in my opinion, even better.  I’m a total sucker for redemption stories.  The youngest brother is a Judo champion who looses his sight during an accident.  The eldest brother is a petty criminal who uses his brother’s misfortune to get out of prison on parole early.  The two have been estranged for years – ever since the older brother ran away from home as a teenager.  And yet, slowly, wonderfully, these two are able to come back together… and restore hope and meaning to one another’s lives.  Cho Jung-Seok was genuine and hysterical as the unruly brother (seriously, I laughed a lot over this guy and his ridiculous behavior… I have an older brother, and let’s face it… they’re kind of jerks most of the time but also your heroes)… and Do Kyung-Soo was outstanding as the young man struggling to find the will to live with his new disability.  This is also a melodrama… and it’s pretty freakin’ sad, too.  But I also felt good at the end, hopeful even… my faith in humanity restored a little bit.

Anyways, check ’em out if you’re in the mood.  Quality stuff.

END_OF_DOCUMENT_TOKEN_TO_BE_REPLACED

Sinking in the Swamp of Sadness – Review – I Miss You 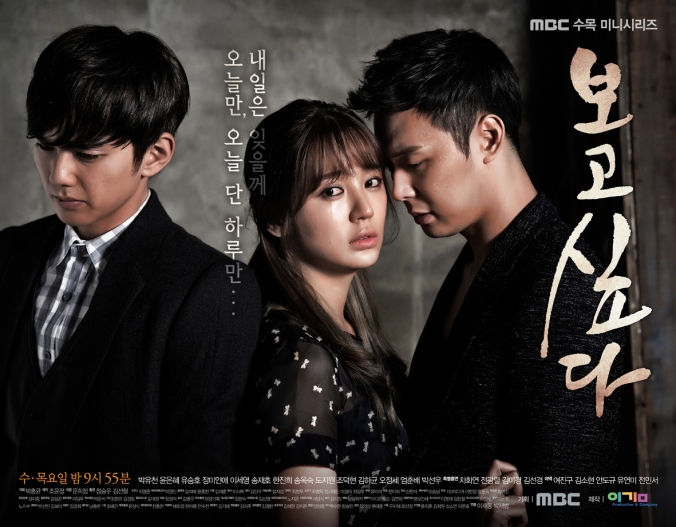 Well, this drama was a big ball of bawling.  If you made a drinking game involving how often the characters broke down into hysterical tears, you’d be drunk off your ass before the end of episode two, possibly a danger to yourself and others by episode four and definitely dead from alcohol poisoning by episode six.  Meanwhile, the show would keep crying without you, pouring booze on your fresh grave until the very end of the drama.  Now we know how Artax felt. 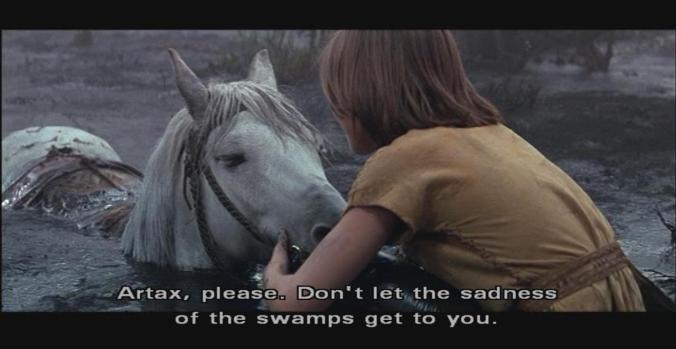 Ironically, the saving grace of this show wasn’t the excessive sadness.  The lighthearted moments, the sentimentality, and the stellar cast managed to pull what would otherwise be a huge disaster up onto the shore – leaving a mangled but otherwise recognizable ship of Korean melodrama.  Thus it manages to be decent.  Not great, not even good… but watchable.  If you’re in the mood.

Glass Half Empty or Glass Half Full?  Let us discuss….