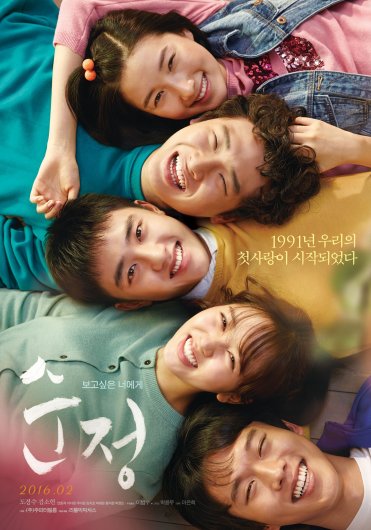 I was on a Do Kyung-Soo kick… or maybe just a crying kick, I’m not sure… but I ended up watching two Do Kyung-Soo tearjerkers back to back yesterday.  They were both lovely films – full of outstanding performances from all the actors involved.  Pure Love was a story about a group of teenage friends who are home for the summer in 1991, enjoying their beautiful coastal village and the pains and joys of growing up.  One of the girl’s has a genetic problem with her legs and struggles to walk – while secretly hoping for an operation that will cure her.  The boys in the group all love her, in their own ways, but in particular one sensitive young man who follows her around like a lost puppy.  It’s a gorgeous film… a thoughtful, nostalgic piece about youth and also about the betrayal of coming of age.  I ain’t gonna lie… I cried.  A lot.  They really did not intend for anyone to leave this movie with dry eyes and I’m sure succeeded…. cause a lot of it tore my heart out.

My Annoying Brother was, in my opinion, even better.  I’m a total sucker for redemption stories.  The youngest brother is a Judo champion who looses his sight during an accident.  The eldest brother is a petty criminal who uses his brother’s misfortune to get out of prison on parole early.  The two have been estranged for years – ever since the older brother ran away from home as a teenager.  And yet, slowly, wonderfully, these two are able to come back together… and restore hope and meaning to one another’s lives.  Cho Jung-Seok was genuine and hysterical as the unruly brother (seriously, I laughed a lot over this guy and his ridiculous behavior… I have an older brother, and let’s face it… they’re kind of jerks most of the time but also your heroes)… and Do Kyung-Soo was outstanding as the young man struggling to find the will to live with his new disability.  This is also a melodrama… and it’s pretty freakin’ sad, too.  But I also felt good at the end, hopeful even… my faith in humanity restored a little bit.

Anyways, check ’em out if you’re in the mood.  Quality stuff.