Review – Thank You (…No Thank You) 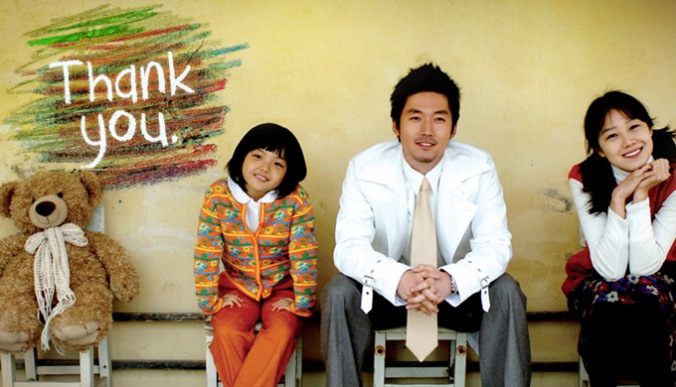 This drama is all about understatement (the picture above is very misleading… basically the little girl and grandpa are the only happy souls in the show).  It’s almost entirely set on a small island, the slow pace of life mirrored in the slow pace of the story unfolding.

Plot:  A young girl is desperately in love with her childhood sweetheart, who thwarts her to go off in pursuit of bigger ambitions.  But not before knocking her up, unbeknownst to him.  She raises the child the best she can, along with her elderly grandfather who suffers from dementia.  When her daughter is about eight years old, she’s in a car accident – and due to a mix up at the hospital, given contaminated blood and ends up with HIV.  The doctor responsible dies, but not before sending her doctor boyfriend off on a mission to apologize to the child and mother for her.  A series of events bring the doctor and the long-lost father of the child back to the island at the same time – and basically… it’s a slow, atmospheric WWIII of the Heart, with the adorable little girl at the center.

It’s a decent story about responsibilities and insecurities and families and communities.  You’ll come to know the small town and all the people in it as if you moved in, too.  I didn’t love it.  I’m not sure I even liked it.  The whole thing was a dreary mess, honestly… sort of washed out and pitiful instead of intense and heartbreaking.  I prefer my melodramas to be the latter.

Just a little bit more… but not much…. light spoilers follow…

This is from the same people who brought us I’m Sorry, I Love You – which I enjoyed much more because the story was so compelling and, honestly, three times more intense.  It was also about dysfunctional families and abandoned family members and regret and incurable medical problems and strange, hypnotic love.  It was like a Tennessee Williams play.  I will never forget that drama-queen mother and her hysterics or her struggling spoiled son or her miserable abandoned twins… EVER.  But I’m pretty sure I’ll forget about Thank You by the end of the week.

Anyways… the three main adult actors of this show were good… I guess.  They’re staples of the K-World community.

Kong Hyo-Jin kept her head down and seemed hopeless but attempting, with all her frail might, to remain strong – I just wanted to hug the poor gal most of the show, I felt so sorry for her.  She was really excellent in this show and perfectly cast.  But I couldn’t relate to her in any way and I wished we’d been given even the smallest glimpse of her as a happy person or… you know… maybe a little hidden personality other than the drained soul we were presented.

Jang Hyuk did not win me over… he just came across as a smug jerk til towards the very, very end… and he was so awkward!  He didn’t seem to have any problems being romantic with his first girlfriend but couldn’t even muster up two seconds of charm for Kong Hyo-Jin’s character.  He was just rude and overbearing.  I admit he became more likable at the very end – but still seemed emotionally miles away from our leading lady.  He only gave his sweetness to the daughter and grandpa.  Ugh.  Since when is that romance?  I am supportive of your family so thus you must love me?  I mean… following a girl around quietly and never expressing yourself is not exactly the path to true love.  And he kept berating her about not liking him – which I found off putting – insisting it was soooo obvious and she was just being stubborn and not wanting to accept him, but like I said… there are zero romantic overtures.  He just hangs around the house being helpful when he’s not scolding her for something.

Shin Sung-Rok was amazing as the conflicted father, though, torn between his mother and new fiance and the family he unwittingly (then willingly) left behind.  Whoa.  I’ve only seen his play villains, and though he wasn’t likable in this, he showed real dimensional appeal in his acting.  I mean, the dude was so intense he could just sit in a car motionless for an entire episode and I was spell bound.  I could also watch him play basketball for hours… and I hate basketball… so I concede it may have more to do with my eyes, but whatever, at least something made me happy in this depressing show.

The small town hysteria about AIDS was also nicely handled.  Though it was sad to see everyone flip out and ostracize the little girl – it also felt real.  I enjoyed the medical community and family attempting to educate the ignorance out of the masses – and how much of a struggle that can be when panic has people in its grip.  This can be true of anything that scares people – and like most things that scare people, it’s generally more to do with our ignorance than reality.  And it doesn’t magically dissipate over night.

I think the prologue to this show was too short.  We could have used a little more set up time, in my opinion.  I would have liked to have seen more between the mom and baby-daddy when they were younger… or the scene where they hooked up… or maybe just explain that scene more where she shows up in a prom dress and begs him to love her…?  What was that?  I would have liked to have seen the car accident her daughter was involved in.  I would have liked to have understood our asshole city doctor a little more – and his confusing relationship with his dying doctor girlfriend.  What was their deal?  I don’t need everything spelled out but there’s no need to be so freakin’ vague when you have sixteen hours to explore a plotline.

The children saved this show from being horrible.  The daughter, of course, being the main bundle of adorable.  She brought out the sweetness in everyone – and made unlikable characters seem human.  The jerk doctor seemed charming when running around with this little nugget in his arms.  The baby-daddy melted like butter when helping his daughter build a house for her new kitten.  The mom, of course, had her only smiles when playing with her daughter.  And the neighborhood children also brought life and cuteness to an otherwise blah community.

One last thought… uh… the little girl could have easily had two dads!  Stepdads are a real thing, you know.  They didn’t have to break apart the world, you know.  Shin Sung-Rok could have married the woman he loved and still been a great father to his daughter.  I guess it’s a cultural thing, but this was never even considered as a possibility by anyone!  It was all or nothing with these people… the winner being whoever could win over the mom.  Seemed deeply flawed to me.