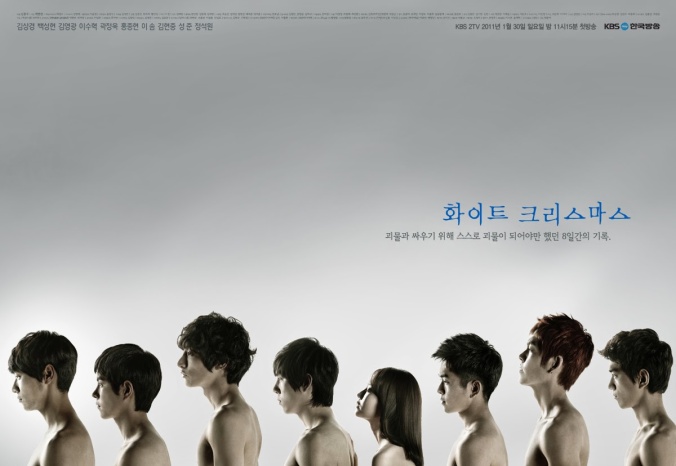 In 2011, they gathered together all the young stars who could tear down a house with their acting abilities and threw them in a short, creepy drama together called White Christmas.  They set the entire thing to late 20th century indie music…  Primal Scream, Massive Attack, The Pixies, Alice in Chains, Velvet Underground… like a stolen mixed tape from my formative years.  The plot is simple – seven students receive a threatening, confusing anonymous letter saying they’re all cursed and someone will die over the Christmas break.  So they all stay behind, as the rest of their peers leave for the holidays.  These stragglers linger in a huge empty school building isolated on top of a snowy mountain… desperate to discover what role they have to play in this mystery.

And at its heart, the show is a mystery.  But it’s also an examination into a high pressure school system.  It’s social commentary.  It’s a therapy session.  It’s an exploration of natural violence.  It’s a story about people… and how they hurt and heal each other.  And it is DARK, people.

I’ve had it in my que for months… saving it.  Now that summer is coming to an end, I finally treated myself to dessert.  And it was exceptionally tasty.  Only eight episodes long but jam packed with mesmerizing performances, plot twists, and a startlingly original story.  It’s on Viki – go watch it now! (and please when you’re watching it take note of all the bizarre conceptual 90’s-style photoshop artwork all over the walls in every room… cause… wow… so eerie… remember the doll heads?)

The kids rocked this show.  They were sooo good!

YOU TAINTED ME, MADE ME PITIFUL.

Let’s just start with who I thought was the stand out performer in the entire cast.  Kim Young-Kwang… who played the school bully, Jo Young-Jae, nicknamed “The Plague.”

Inside, he was a terrified child… raised by an over protective, emotionally unstable mother.  But on the outside… he was pure hell.  Just two snaps away from breaking in half.  He was the character I worried most over and strangely sympathized with most.  The self-imposed outcast.  The guy who is always looking over his shoulder…  while making others look over their shoulders.  I was scared for him and scared of him.

I also thought this actor pulled off the most dynamic range in emotion while also giving us these understated, painfully sensitive moments.  Damn, he was good. 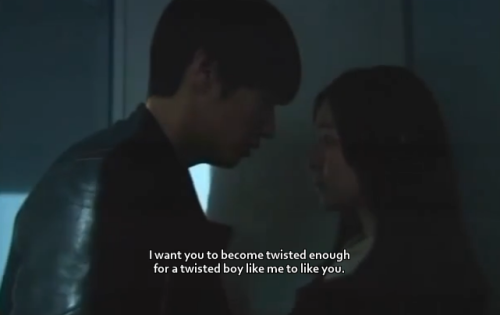 His evil banter with the school sweetheart-turned-ice-queen was horrifying and engaging.  His ceaseless bullying of the boy with the hearing disability was creepy and unrelentingly violent.  When he finally turns on himself… I wasn’t sure what was going to happen, but I was freaking out hoping he didn’t blow the whole show up.  Watching him sit and boil on the inside was even scarier than watching him run down the hallways chasing after people with murderous intent.

YOU MADE ME A MONSTER IN THE CORNER.

Lee Soo-Hyuk played “The Angel,” the resident rich boy who everyone berates for buying his way into the school.  He’s the sensitive, poetic one.  The dreamy, druggy, musician who perches on railings and disappears into his own worlds and mythologies.  Honey, when he starts rattlin’ on about a monster in the corner and dwelling on evil, it sounds like someone reading William Blake poetry.

Perfect choice in casting, honestly. Lee Soo-Hyuk’s beautiful, has that dreamy voice… is tall and willowy and ethereal… I think we all knew someone like him growing up.  Someone who seemed removed from the ordinary.  Lost.  Tragic.  Gorgeous.  And generally on drugs.

He was known as “Mad Mi-Reu“… prankster, wildcard, stunt devil.  He’s also at ease with physical violence, like “The Plague,” but at least more directed with it – as in, he seems to have reasons he goes after people instead of just being an general ass.

I thoroughly enjoyed his character.  He was genuine and honest.  Self assured, extroverted, confident.  Seems unfair, really.  High school is supposed to be a horror show of insecurities, but he seemed to be doing alright – other than his jealousy of the smartest boy in the school and his trouble staying IN school.

YOU RIDICULED MY FALSE HOPES.

Our Ice-Queen is the only girl (well, until our rando ice trekker comes in from the cold) who stays with the boys over the holiday.  Once the happiest, most beautiful girl at school – she mysteriously changed and became stoic, sad, and withdrawn.  And no one knows why.  She broke up with her boyfriend.  She gave up her friends.  She started cutting herself and staring out windows….

She was interesting.  Esom was able to bring the sadness and anger of this young girl to life.  Her struggles with depression, her suicidal tendencies… I thought it was handled beautifully and loved her character arc.

YOU TOOK THE ONLY THING I HAD AND PUT IT AROUND YOUR NECK.

Sensitive.  Practical.  Reasonable.  You can tell he’s almost exhausted by it, doing the right thing.  All the kids naturally turned to him for leadership.  He’s at the center of the story, as he’s the one responsible for keeping everyone else from flipping out and going pure mad dog on each other.  I appreciated how he also knew how far to let them run on the leash before reeling them back, too.  Smart kid.

I HELD OUT MY HAND, AND YOU LET GO.

Kwak Jung-Wook played the Yang Kang-Mo, “Cameraman.”  The school photographer.  The kid with a hearing impairment.  Bullied constantly by The Plague.  Quick witted and dry humored.  An observer of people.  This kid was amazing!

What a complicated piece of work, huh?  Being so apart of everything but so separate? This together/other motif both in his hearing impairment and his hiding behind the camera.  I think this kid had grown up the most, out of all of the kids, but growing up doesn’t always help you. 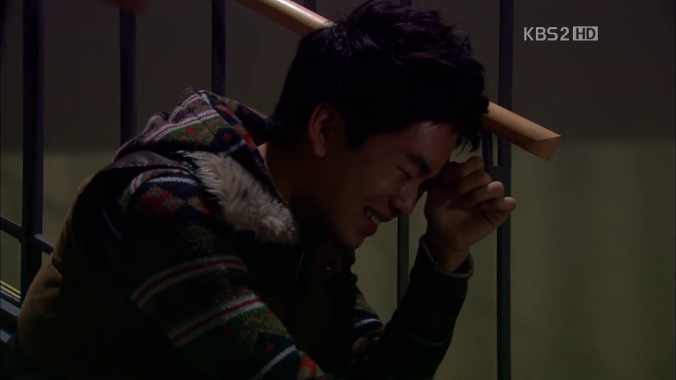 In a way, he felt more like the “every man” character.  A bit more normal than the other extremes gathered together over this mysterious holiday.  He was a necessary balance.

YOU DELETED ME FROM YOUR EYES.

Sung Joon played Choi Ji-Hoon, the school’s genius.  The top student.  The smartest kid at the school.  The aloof, cold, detached dude who analyzed everything without emotion.  Everyone hated him a little, I think.

I loved how this kid actually had a disability no one knew about – a brain development problem that prohibited him from feeling emotions.  Sung Joon was great, too, playing this Sherlock-Holmes type character, blunt… highly intelligent… sauntering in and out of rooms with his long coat and his perfect posture making everyone feel stupid.

FINALLY, YOU OVERTOOK ME.

Hong Jong-Hyun played the new kid, Lee Jae-Kyu.  Shy.  Awkward.  Uncomfortable around everyone.  The smartest kid at his last school, he’d come to this elite school only to fall into obscurity.  He was horribly lonely.  Struggling.  The outsider. 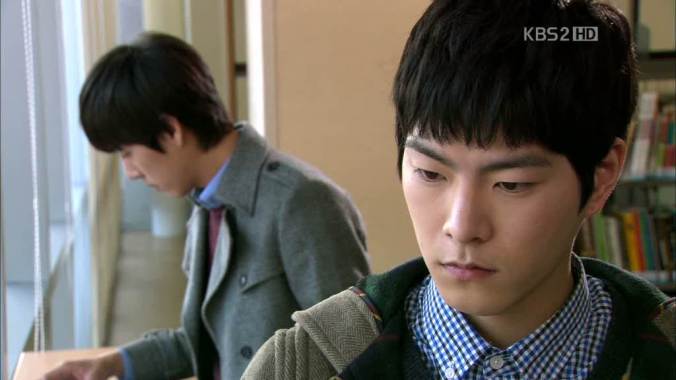 Of course, I adored him.

and I admit, the most memorable scene for me will be him trying to go after The Plague with a coffee maker… his face a bloody disaster…

Talk about a Lord of the Flies moment.

I loved this character’s story and his secrets and his solitude.

Of course… the teens weren’t the only characters.

We also have the adults all loosing their minds in this snowy wonderland.  The private school reminded me of the hotel in Stephen King’s The Shining… isolated in the mountains, the dark rooms and hallways, the vast empty spaces, the echo chambers… (actually, a lot of the plot reminded me of Stephen King’s short story, The Rage, in which a suicidal teenager takes his fellow students hostage at school and forces them to tell uncomfortable truths at gun point).

The Teacher – the snarky, Judo expert PE teacher who’s forced to stay over the holiday to monitor the kids.  I don’t have a lot to say about him.

The Serial Killer / Shrink, however, I feel we should discuss.

This dude was, in my opinion, a very boring villain.  The kids were far more terrifying.  I mean… I liked the element, and I wouldn’t have taken it out… I just felt like we needed to see him in action, once, to believe he was scary.  Cause I never believed he would really kill someone.  They should have shown us something… to put a chill in our spines.

BUT… he was a marvelous evil shrink.  He nailed that role.  Psychologically torturing teenagers is far more frightening than physically threatening them anyways.  His creepy therapy sessions.  The hypnosis.  The truth games.  The manipulations.  All the ways he messed with their minds, cast doubts, forced them to see unpleasant truths about themselves… these were the sheer genius of the character.

And his crazy patient zero – played Lee El!  Holy Moly, that was old school horror movie.  Now, I believed she would kill someone.  Cause, I’d seen her jump over a table and slam someone’s head down without thinking twice.  Watched her go glassy eyed and slice up someone with a Swiss Army Knife.  We’d seen her in action, and even though it wasn’t a lot… it was enough that she came across as CRAZY AS HELL.  And thus, really and truly scary.

Sure, it was a little confused in its focus.  Sure, there were some head-scratcher moments.  Sure… some of it was way too over the top.  But, I enjoyed exploring the lives of these teenagers.  They were all so isolated.  They spent, as the teacher said, 18 hours of their lives studying… do they have time for anything else?  No.  They don’t really even have time to figure out who they are.  It takes this horrible series of events for them to actually makes friends… and I have a feeling these will be the only friends these kids ever make.  They don’t have social skills.  They don’t have hobbies.  They don’t have interests (well, Mad Mi-Reu does) outside of academia.  They’re just… little machines.  In a really fancy boarding school.  But finally they got to know themselves… and someone else… bonding over adversities and horrors… a little bloody band of brothers, so to speak.

Check it out.  For the fan factor alone, honestly… so many amazing actors in this!