Shining Inheritance is one of those “classic” k-dramas that sticks firmly to its tropes, indulges in its stereotypes, and ultimately resembles lessons taught in Vacation Bible School.  At the end of every episode, I half expected G.I. Joe to pop up with their moral tag line “Now you know.  And knowing is half the battle!”  Good people persevere despite obstacles.  Bad people will eventually get their due comeuppance.  You will fall in love G-Rated style and if your love life didn’t work out, you will bow out gracefully, without hard feelings or regret.  Welcome to 28 hours of a feel-good romantic drama.

Every time I come across a drama like this, I am tortured by conflicting emotions.  It’s a definite love/hate relationship.  I love the sticky sweet stories, the determined Pollyanna characters who you’re bound to root for, the cute if not predictable romances.  And I hate it, too, because it removes itself so far from reality that its difficult to connect emotionally with the characters.  Other than being stereotypes, who are they?

In this K-Fairy Tale… we have Cinderella, the Evil Stepmother, the Worthless Father, the Matriarch, the Spoiled Princesses, the Kind-Hearted Underdog, the Lost Son and the Brat Prince.  Who are they other than that?  I’m not entirely sure, and I just spent 28 hours with them.  Just like characters in a fairytale.  You like them because they’re simple.  Easy to understand, easy to identify.

Hello My Name is Cinderella

Not that I am saying this drama is 100% predictable.  These aren’t Disney versions of fairy tales, after all.  This is more like the original Brother’s Grim.  It’s dark, it’s full of shocking twists and turns and people get hurt.  There are unexpected curves in the road and scary paths through the forest.  As in life, having a good personality and a moral conscious does not mean that people will automatically side with you.  Friends can turn to foes unexpectedly.  Shadows fall over your clear record.  Questions surface.  Suspicions are aroused.

Which makes it fun to watch.  These are stereotpyes navigating a new game board.  If you’re familiar with k-dramas, you may know most of the rules.  If you’re new to drama-land this show is a terrific crash course in tropes and Korean family and work dynamics.

Let’s take a look at the matriarch of the story, the grandmother.

She built her empire from scratch and showered her family in the fruit of her labors.  Only in old age does she finally begin to realize she may have done her offspring a disservice by spoiling them rotten and isolating them from the real problems of the world.  She refers to them as roots grown wild in the garden that must be mowed down in order to grow again.  Biblical, no?  She disinherits them and throws them kicking and screaming into the workforce.  Their security blanket goes up in flames.  How can they live without the golden promise they’d been assured of since birth?  How can they navigate this barren landscape of uncertainty (made more comfortable by continued use their house and home and the families vast employment opportunities)?  To be used as their example of a “good apple” she brings in Cinderella.  Does the grandmother really intend to bestow her legacy on this lovely stranger?  Or was there a Plan B always laying in wait?  Did she act on impulse – a whim devised from old age and possible dementia?  We know her mind was starting to go… but where was it taking her?  All these questions make for a compelling story.  You’re really not sure how it’s going to end up – other than the forgone conclusion that Cinderella would fall in love with the Brat Prince and bring these two “houses” together again, in fortune and fate.  Still, that’s a lot of mystery on our road to a happy ending.  Enough to keep this drama high in my list of esteemed classics.

On the other side of this wealthy family, we have Cinderella’s family.  Like Cinderella, our lead female is of the upper class.  Raised wealthy, schooled in America, the apple of her father’s eye.  When her father’s fortune goes bottom up, daddy goes into hiding leaving Cinderella and her autistic brother behind under the care of the Evil Stepmother.  They did not pull any punches with the Evil Stepmother.  She quickly asserted herself as pure bred evil, kicking both Cinderella and her impaired brother onto the streets to fend for themselves.  Meanwhile, she hordes the money and keeps herself and her own daughter in comfort. 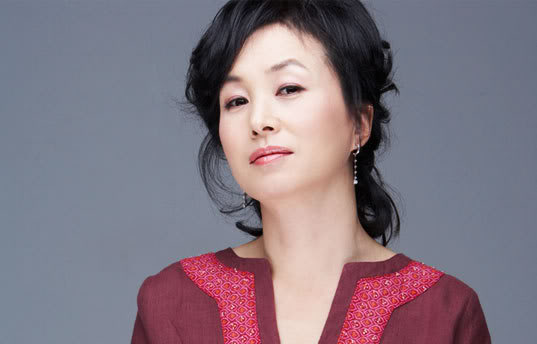 There is no explanation as to why our lead female takes to poverty so easily.  She jumps into the workforce with ease, doing menial work with a smile on her face.  On second viewing, this elusive detail frustrated me.  Was it simply necessity that caused our lead female to adapt so easily?  Would things have gone better for the other family if grandmother had just kicked them out of the house, too, causing them to literally sink or swim?  We’ll never know.

I was incredibly impressed with the young actor who played the autistic piano-genius younger brother of Cinderella. 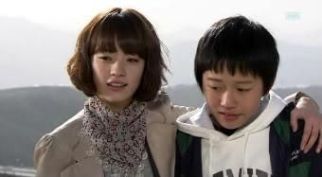 The hysterically incompetent Spoiled Princesses were enjoyable in every scene. 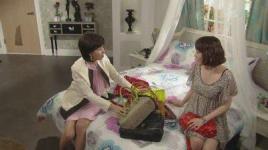 They were so insulated and accustomed to their lifestyles and place amongst the wealthy elite, they didn’t even realize they were shameless and pitiful – which made it all the more entertaining whenever they stomped their feet and pouted throughout the show.

On the other side of the love triangle, we have the Cousin of our Brat Prince.  We shall call him Prince Charming.

Somehow he managed to escape the personality flaws of his relatives and is genuinely sweet, caring and hard working.  He volunteers at a soup kitchen.  He runs his own business.  He helps out his friends and relatives, even when he knows they’re screwing him over and putting him in a tight spot.  I don’t personally care for this actor, but he did a fine job of playing Prince Charming.

Though his character is well matched to Cinderella, it’s clear he is stuck in 2nd Lead Male role and will not be getting the girl.

This guy will get the girl. 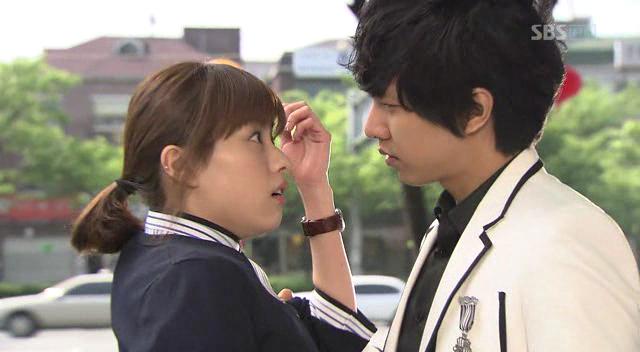 The wrist grabbing, tantrum throwing Brat Prince.  We know he’ll get the girl because he’s the one dragging her around by her wrist.  These are the rules of K-Drama.  If there were any doubts, it’s cleared up by episode 16.  In this episode, he rearranges outdoor furniture and plants to make things more comfortable for our lead female as she naps on a bench.  Adorable.  And classic K-Drama.  Caring for people who are asleep is as vital to romance as caring for people who are sick.  And getting really, really close on a crowded bus is acceptable foreplay as well.

They’re actually a really cute couple.  Feisty personalities with dynamic verbal banter.  It was a pleasure to watch them slowly fall in love.  Coworkers, rivals, both struggling to figure out their place in the world – it seemed very natural and believable these two would be drawn together.  Not to mention their bedrooms were only five feet apart… not that we had any spicy sauce in this family-friendly k-drama meal.

Cinderella’s Sister looks lovely with both male leads… but nope. 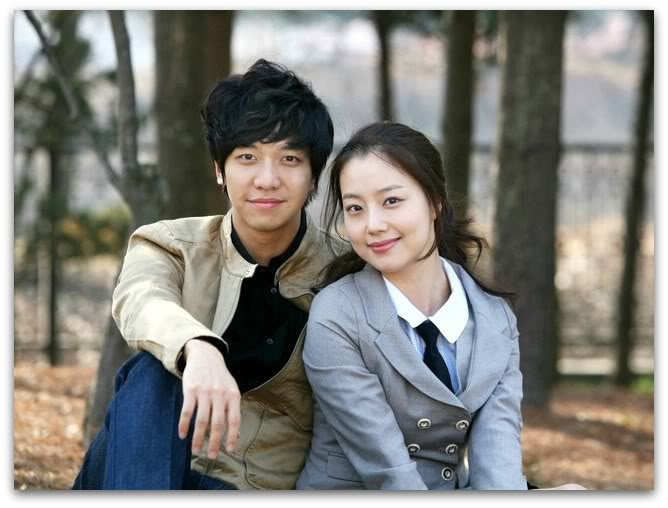 As the daughter of the Evil Stepmother, she’s doomed.  I still don’t know how I feel about this character.  She seemed so strong willed in some scenes and spineless in others.  I suppose this is realistic, but of all the characters she was the hardest to pigeonhole into a archetype.  In a drama overpopulated with characters strictly adhering to their stereotypes, this made her seem awkward and uncomfortable.  She didn’t fit.

Oh well.  Shining Inheritance isn’t about Cinderella’s Sister, after all.  It’s all for this… 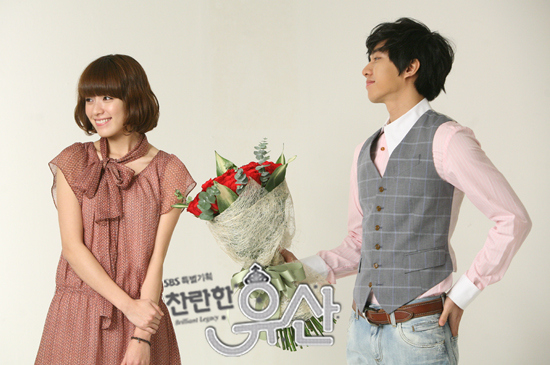 Shining Inheritance is a shining example of simple k-drama done right.  It’s a bit on the long side, true, but the plot mixes things up enough that you’ll power through all the episodes waiting for the dramatic satisfying conclusion you know will come.  And it is satisfying.

They lived happily ever after.