Though I still don’t think this is a perfect drama and stick firmly to my 8/10 rating, I must confess… the rewatch factor on this show is HIGH.  I have rewatched this show several times.  Maybe not all the way through, true, but I’ve cherry picked my favorite episodes and scenes and tend to crave them like a pregnant woman craving pickles.  Nothing else will do.

Some thoughts on the rewatch.

There is no replacement for the Drunk Ninja Chun. 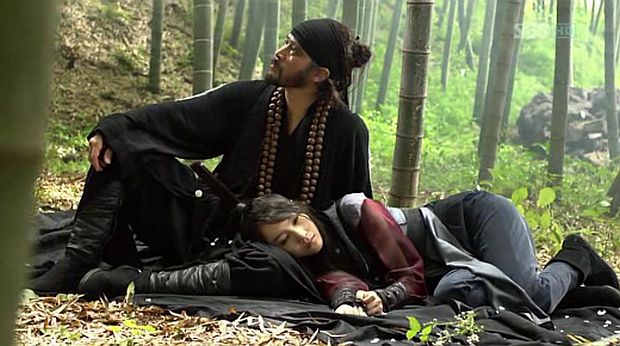 I have had lurid dreams about this black-clad baddie.  Embarrassingly explicit.  I would tell you more but even the naughtiest of fan fiction writer’s would blush.  From the way he rides a horse to the way he cuts down his enemies, he does it with swagger.  With bravado.  With an ease.  He’s like a god among mortals.  Everything he does seems so easy, as if he’s laughing at all the regular people.  Oh this human flesh?  Piece of cake.  Look how easily I shuffle around in it, as if I don’t care one bit about being hacked to death by swords or trampled by horses.  Nope.  Nothing bothers me.  Except, you know, the things that do… and you’ll know and I’ll know you know and we’ll both not say anything but we’ll both know and the KNOWING will weigh down on our house like a ton of bricks, threatening to destroy us all.  Sigh.

How many world’s does Yoo Seung Ho hold in his eyes?  I swear, I think there’s a dimensional paradox in this actor… as if he swallowed a Tardis.

It was a role that probably seemed ordinary on paper.  The screenwriters said, “We need someone to play this kid Baek Dong Soo’s rival and then they’ll be friends and then they’ll grow up and Baek Dong Soo’ll turn out good but the other kid will end up bad and it will break your heart but that’s their destiny.”  And the casting director thought, “Huh.  That’s going to be tough, cause if we don’t find someone who can carry emotional weight around like Atlas carrying the planet, then it’s not going to grab your attention.  What about that kid who swallowed the Tardis?  Is he available?”  And thank god he was.

Baek Dong Soo’s Work Ethic.  As an American, I grew up with television shows that believed learning something was too tedious for the attention span of the masses and put everything that required time and repetition to music.  Montages.  That’s how things get done in America television.

But in K-World, you actually have to suffer through your character suffering through something.  Like Baek Dong Soo learning to be a decent fighter.  Oh my god, that child was not a natural, am I right?  It took him forever!  Forever and ever.  And he just kept at it until he was good.  And then he kept going until he was the best.  Cause he was cocky and smug and determined.  I loved it.  I especially love Ji Chang Wook for having this eager, puppy dog quality.  The actor Lee Seung-Gi has it too.  Little boys trapped in big boys bodies.  I believe it when they keep going back, over and over, to whatever their goal is because that’s what a loyal dog would do.

Cool Forgettable Characters You Can’t Believe You Forgot.  Remember the kid with the glasses?  What about the girls in this show?  Do you remember any of them? 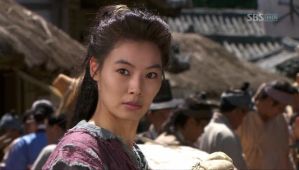 What about the funny bad guy who kept getting slowly dismembered?  You know, the ridiculously over-the-top one who brought devious comedy to the show?  The old warrior who fought Chun?  Remember him?  It’s astonishing how many forgettable characters there are in this show because, let’s be honest, when you finish watching all you’re thinking is BAEK DONG GOO and YEO WOON!  OMG!  And maybe still fantasizing about Chun.

The two male leads of this show were mesmerizing, from beginning to end (snaps to the child actors, who were ridiculously talented little actors AND really looked like young versions of the adult actors who would play those same characters).  It was such an emotionally draining bromance that you forgot you were emotionally involved with other people too.  But when you rewatch it, you immediately remember them and think “Oh yeah!  I love this guy!”  or “This chick is a bad ass!  How did I forget her?”  It’s okay.  Forgive yourself.  That’s what rewatches are all about.  And probably why I can rewatch this show so often. 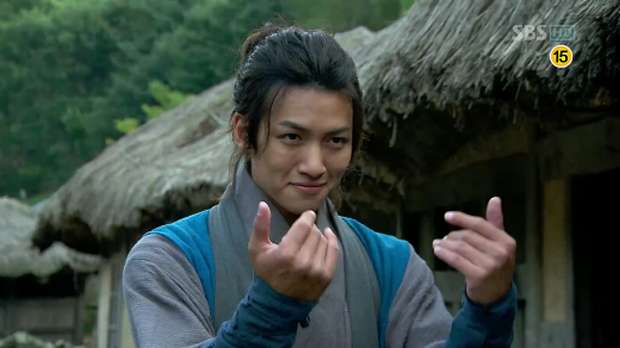 Bring it one more time

The Hair.  The boys went through a lot of transitions with their hair, did they not?  They had the crazy scruffs of youth, the headband with bangs phase, and the pony tails.  Some days their flat iron worked better than other days.  Chun’s man buns.  The wigs were great… and sometimes they were able to mix the real hair in with the wigs and it was even more impressive.  And I’m always amazed how great they can get fake hair to look when it’s wet.  Even the chicks played some impressive hair game.  Three days in the forest and not a hair out of place.  I’m not sure what kind of mousse or spray they employed in that era, but it had some freakin’ hold.

The Sword Fighting.  Holy Moses, there was some awesome action sequences in this show.  Thank you stunt men and women.  Thank you choreographers for helping our actors dance around in a menacing away.  Thank you editors for making it seem real.  Thank you music producers for getting it right with your bizarre mix of modern heavy metal guitar and old school instruments.  Thank you costuming for realistic blood and wounds (and a few less realistic, but honestly we were overall impressed).  Thank you South Korea for having a long and interesting history to draw from…

And thank you HORSES.  The use of horses in this show was phenomenal.  It can’t be easy to have that many horses on set and still get epic fight sequences and character shots, but they did.  And seamlessly.  Ride, cowboys, ride! 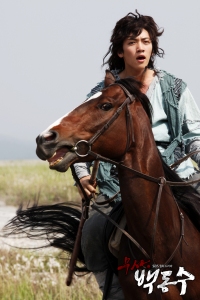 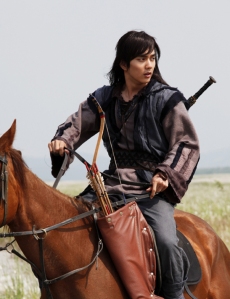 Love, Honor, & Duty.  My favorite thing about these historical dramas is the heightened sense of honor and duty.  People throwing down their lives for each other, sacrificing limbs, giving up children.  Royalty, of course, being the main culprit.  All these bad ass dudes willing to fight off the very devil to save the life of their emperor/king/whatever.  It’s noble.  It’s such a foreign concept to me, as a modern woman, as an American.  I mean, I might risk my life to save a child… but a grown man?  Tsk.  The relationships in these shows are tightly bonded, and rightly so.  You might actually be called in to defend/revenge your friend, your lover, your parents.  They were dark times and this is a story about warriors, after all.

Remember the scene where the soldier is fighting off Chun to save the Prince… and he knew he was about to die but he was gonna go down in a blaze of glory to protect his royalty, by golly… and then young Baek Dong Soo jumps in and jabs his sword into Chun’s side to try to help the dying soldier, cause he was going to do anything to save his soldier mentor… and then it’s this pin cushion of mixed loyalties and swords sticking out everywhere and intense emotion and honor and adrenaline… and I thought, “Holy Shit, this show is bringing it!”  This scene: 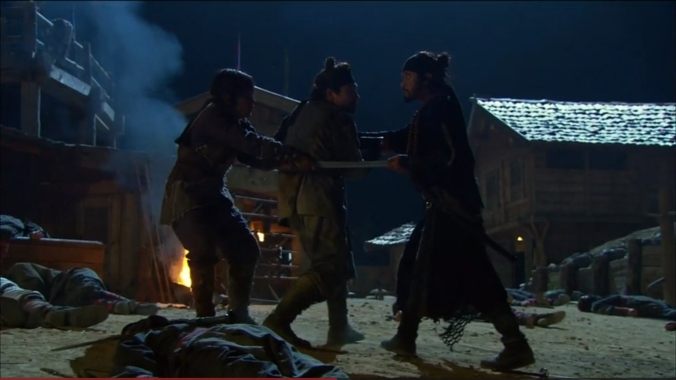 And then little Yeo Woon jumps in front of Chun to save his bestie Baek Dong Soo, but gets pushed aside.  Five seconds later Chun is actually kneeling over Baek Dong Soo giving him an improv lesson on how to properly kill someone and hold a sword correctly… cause he’s Chun… and then he stabs the little kiddo in the gut, cause, you know… fair is fair.  Then he walks over to the dying soldier and shows Baek Dong Soo exactly what he’s talking about, continuing his murderous lesson, because that’s what good teachers do.  Show and tell.

Remember that scene?  Probably not.  I didn’t remember it.  Ep 5, if you’re curious.  But rewatching it, totally fell in love with it all over again.  Gah, it’s so cool!  How could I forget that scene?  That scene tore me up!

Please Go Back For Seconds.

I actually think this show improves upon second viewing.  You can appreciate how pompous and hysterical Baek Dong Soo is.  All the “There’s only two things I hate…” speeches he makes.  I laugh every time now, though I’m not sure I was really sold on the humor the first round.  Same with the goofy villain who keeps getting slowly hacked to pieces over the course of the show.  I love that actor!  And his bizarre and taunting character really stands out upon rewatch.

Warrior Baek Dong Soo is perfect for a rewatch because the first time you really are too obsessed with Baek Dong Soo, and Yeo Woon (and Chun).  Their story is so primal, so in focus, that’s hard to look away.  But once you’ve seen it, you can breath a little easier.  You know what’s coming.  You can relax a bit.

I thought we told you to relax.

So maybe it does deserve a higher score.

How about this:  Overall Score still 8/10.  Due to dumb plotlines such as the Great Ginseng Conspiracy (which turned out to be nothing more than an allergic reaction to fake ginseng) and the fact this show is about 10 to 12 episodes TOO LONG.  How can we go on post-Chun?  I mean… the credit should have just rolled when he did.

Rewatch Score 9/10.  Cause you fast forward through all the dumb faculty meetings where the king is presented with really bad circumstantial evidence and everyone chants “CHUNA!” and the old man caves and believes whatever they say… blech.