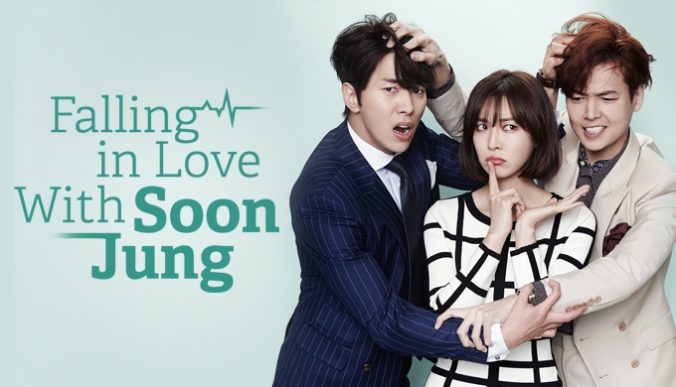 I just didn’t get this show.  I watched it.  The whole freakin’ thing.  Cause… I don’t know.  Why did I keep watching it?

Soon Jung is boring… sooo, sooo boring.  Why did all these people fall in love with her in the first place?  It’s not Kim So Yeon’s fault – she can be wonderful in shows but apparently she forgot to read the script before she agreed to make this drama. The haircut did NOTHING for her.  It made her look like an expressionless mannequin… and her face has always looked a little manufactured to me anyways, so that didn’t help.  They should have made a little effort to give this character some depth or dimension, cause she was as flat and dry as cardboard.

Jung Kyung Ho played the asshole businessman who gets a heart transplant from a nice guy, magically transforming him into a decent human being.  He was cute in this.  Not amazing, not even necessarily memorable, but cute.  At least he brought his character to life and had fun with it… and with his hair.  Plus he had an adorable male secretary.

Yoon Hyun Min played the most interesting character – the dude who’d been in love with Soon Jung forever but had always stepped aside.  But after her fiance died, he thought he finally had a chance.  Wrong!  Her fiance’s heart ended up in his business rival’s chest and the next thing you know, he’s playing the entire sad story out again.  Except this time he’s not gonna bow out gracefully.  Nope.  This time he’s gonna go bat shit crazy and see if maybe scaring his crush to death might be a more successful romantic approach.  While normally I would say “What were you thinking?” this method has actually worked in other dramas… so… you never know.  He was a complicated mess of a man, though, and the most fun to watch.

The plot is dull.  Some people are trying to save some vague cosmetic business while other people want to sell it off to make money.  You won’t care.  You’re supposed to care, I think, but they forgot to tell us why.  Cause, uh… people work there?  Whatever.  And then there’s the mystery of how Soon Jung’s fiance died – which is revealed to the viewer about halfway through the show so we have to sit around until everyone figures it out.  The two dudes fighting over Soon Jung aren’t interesting as a dynamic because she only likes one of them and not the other – so there’s no real triangle at all, just this sad unrequited love from this sort of sad, pathetic dude whose lost his marbles.

I really should have dropped this drama.  I’ve been watching it in chunks for weeks, just going back to it when I had a little time here and there.  I don’t know why, honestly.  It was not worth sixteen hours of my time.  The “romance” sucked.

Overall Rating – 5/10.  Why Does Anyone Fall In Love With Soon Jung?