Review – Ruler of Your Own World

His expression sums up my feelings about this show.

This drama has an “indie” vibe to it.  The characters are street-smart, there’s a considerable amount of informal and bad language, and the whole plot feels very realistic, brain tumor and all.  Like many indie features, you either get it or you don’t.  I didn’t get this drama.  It was like watching Holy Smoke with Harvey Keitel and Kate Winslet, or Your Friends and Neighbors.  There were so many elements that confused me or infuriated me or just didn’t make sense to me.  My biggest qualm being the romance and the most awkward love-triangle of all time.

To be fair – there were some aspects to this drama that I truly enjoyed.  Sweet moments, tender moments, beautifully complicated moments.  Did they balance out my frustration?  Not really.  People loved this drama – it has a cult following – but it just didn’t cut it for me.  I had to force myself to finish it.

The theme, as stated by our male lead, is that it is almost impossible to change your life.  It’s easier to die.  People get stuck in their created realities.  Very cool theme, eh? It worked well with the stories – well, most of them.  Our male lead, played the extremely talented Yang Dong Geun, is a reformed pick pocket.  He decides to mend his wicked ways after being diagnosed with terminal cancer.  On a whim, he joins an action school and begins training to become a stunt man.  As his latest (and possibly last) chapter of life unfolds, he falls in love with another woman.  Alas, his first love is not about to let him go without a long, embarrassing fight.  Oh yeah, and he has strained relationships with both of his parents.  That’s the plot.

Now the the breakdown.  Let’s start with the “psuedo-mafia” brother to our female lead.  We shall call him Mr. Slick. 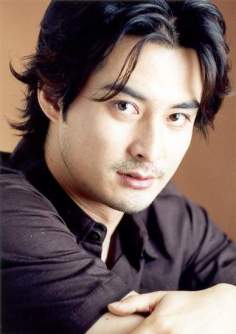 What’s up with this guy?  Does he want to cheat on his wife?  Is he just bored shitless at work and at home?  And his wife?  How did they end up together?  His wife leaving him was one of the best moments of the show.  That and when his father says that he’s the best thing that happened to him, even though he’s not his real kid.  Awww….

Mr. Slick was ideally suited to the feisty fireball of our second female lead.  Those two are as cute as Mortica and Gomaz Adams.  Their few scenes together were magic.

Like so many of the plotlines of this show, we’re along for the ride with no clear directions given to the driver.  We’re going to end up in Guam or just wander the city until our cab fare is so exorbitant that we can’t afford to pay thus have to stay in the cab indefinitely hoping a tire will blow or some miracle of god so we can escape without ending up behind bars.  I was strangely intrigued by Mr. Slick.  There was something there – with the stiff shirt and the casual indifference – and I felt it was never explored.

The mother of the male lead was also a head scratcher.

Okay, so she was an abused woman who’s caught in a vicious cycle.  But her relationship with her oldest son is frightening.  What a monster.  There are different levels of abuse – and she abused her oldest son all the time.  She was downright cruel.  And suddenly she feels bad about it so her answer is to just abandon him again?  And what – she runs a restaurant but apparently it’s not self-sustaining because the second she stops taking her sons money she closes down and sells the place.  How many years does your business have to be in the red before you realize it’s a failure?  What did she do when her son was in jail?  This didn’t make any sense to me.

The dads were both bizarre.  One is rich – but married a woman who didn’t love him but overlooked it for years because… what?  She was pretty?  And the way he treats his children didn’t make much sense either.  The other dad, the father our male lead, also confused me.

He was an abusive alcoholic who mended his ways.  Okay.  He wants his son to have a better life.  Okay.  He’s also a very talented painter.  Why did he give that up?  Why is he driving a bus now?  It seems he still knows people in the art industry – as he visits a sign painter who says the man taught him everything he knows.  Couldn’t he work as an artist?  I didn’t understand his circumstances and they were never fully revealed.  I did enjoy his relationship with his son, however.  It was genuine and the familial bond was strong between the two.  Of course, then he went and overdosed on sleeping pills the second he finds out his son is going to die.  Not very supportive, dad.

The band.  Oh, the band.  Who were these people?

Who knows.  Other than having a fear of performing live, we never got to learn anything about the singer.  We got a little hint when we discovered her mom owned the building they played in.  She seemed tough and sensitive, but that’s it.  The two boys were equally mysterious.  They showed up for practice.  They mention relatives in passing.  They play instruments.  Done.  I wanted to root for the band to make it big!  I wanted to feel their ambition, their dreams, their passion for music.  But I didn’t feel a thing.  They just seemed like kids hanging out in a garage.

The music journalist, also known as the second love interest of our first female lead.

I liked him because he was such a refreshing change from normal k-drama guys.  He was a jerk – but in a believable way.  He was aggressive and clearly feisty with women but didn’t resort to stalking or wrist grabbing.  He wasn’t afraid to voice his opinions or admit when he was wrong.  My love/hate relationship with him started in his introduction – where he abandoned a puppy in a record store without even noticing then has the nerve to be upset that a stranger didn’t take care of it.  But he also recommended Starless by King Crimson, so snaps to his savvy musical tastes.  Love/Hate.  His pursuit of his love interest was also cool and yet bizarre.  Immediately calling her “Honey” and openly flirting and making moves, taking it just far enough to be sexy and not crossing over into date-rapist.  I understood why he liked her at first, but didn’t see how being ditched for another man transformed him into a smitten kitten.  Guess he was just pompous enough that his ego couldn’t take it.  I loved how they resolved his character arch by having him show off his new model girlfriend.  Perfect.

So, let’s talk about our first female lead.  The Musician.  The keyboardist.

Her personality was vague, people.  It was easy to believe she was in her early 20s… like teenagers, these psuedo-adults aren’t fully baked yet.  In that respect, her infatuation turned love with the thief was very real.  That starry eyed romance is very prominent amongst the young.  It’s all chemistry and gut reactions.  They had that going for them.  But everything else seemed off.  Her relationship with her parents.  Her relationship with her band mates.  Her relationship with her rival-turned-friend.  Her relationship with the journalist.  You can practically see the Great Wall of China she’d built around herself for protection.  Emotional distance from others is standard and believable in youngsters, so it didn’t drive me crazy.  It just kept me bored.  The girl needed a real best friend, a close family member – someone to show us who she was.  You know what felt like a real relationship?  How she behaved with that original singer who dies in the first episode or two.  Those two ladies felt bonded. 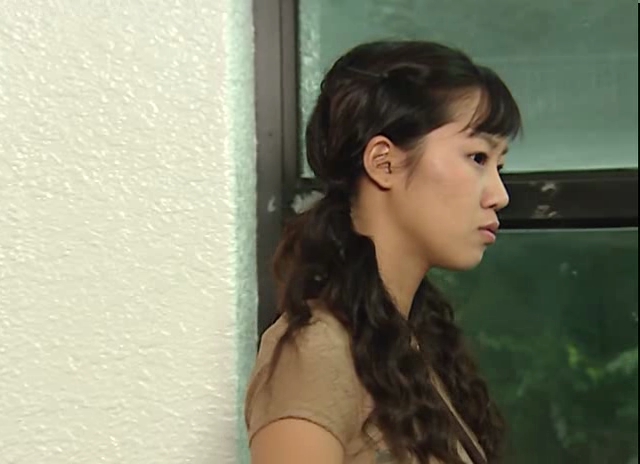 What a fun character!  She was a cheerleader with aspirations of becoming a nurse.  She would kick your ass if you looked at her funny and sometimes even if you didn’t.  Her wild, uncontrollable character brought vitality to a show that would have been doomed in her absence.  Even when I desperately wanted her to give up on her ex-love and find some dignity, I couldn’t help but admire her stubborn insanity.  The second female lead also had her younger sister. 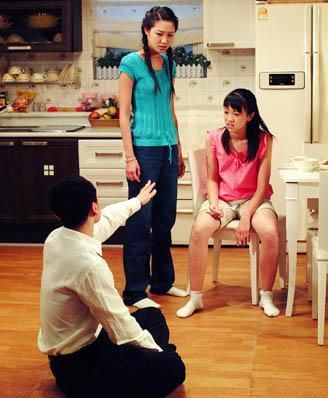 Perfect balance and excellent outlet for character development and grounding.  I felt that I understood her character much more through the domestic scenes of sibling cohabitation.  One sister would loose it and the other would scold her, one would cry and the other comfort, one talk reason when the other lost their sense.  Which was needed cause the second female lead was a bunch of crazy.

The cinematography was nice in this show.  Not beautiful – but well done.  The scenes, sets and costuming worked perfectly together.

The action school was a definite highlight.  The genuine fearless leader, the ex-doctor, the ruffians and misfits who took shelter on the mats and in the wires… these were exceptional elements to the show.  Watching all the boys play together, work together and support each other was really touching.

But enough about everything else.  Let’s talk about the romance. Or the grumpiest couple ever.

Seriously.  These are our romantic leads.  Constantly fighting, scowling, and miserable. Sigh…

There are plenty of couples out there in the world like this one.  They bicker, they bore each other, they annoy each other, they delight each other.  I couldn’t stand them.  At first, it was kinda cute.  Love at first sight and all.  The way they came together through a series of coincidences was nicely played out.  Then the dreaded love-triangle.  It was painful.  Then at last the couple finally gets some time to themselves and I’m watching their “romantic” get away to another city thinking… ugh.  How horribly realistic.  I personally just don’t understand couples like this.  Is there anything going on in this skulls other than the present moment?  The analogy of the goldfish was not lost on me.

I don’t mind G rated romances if I can feel the passion between the characters.  This drama left me cold and my palms get sweaty just thinking about all that hand holding.  Where is the love?  Grade school kids get more action than this under the slide.  We don’t even get a chaste kiss on the cheek.  Just hand holding.  Lots… and lots… and lots… of hand holding.  And an occasion hug.  These two even had an impassioned argument over whether or not she should start spending the night… and then they slept together.  Sleeping.  Went to bed fully clothed, woke up fully clothed.  If we are to imagine anything whatsoever happened, we need at least a discarded sock.  Hated it.

I confess, I didn’t really like Boksu, our lead male.  Boksu was fun when hanging out with his little brother and his buddies at the action school.  He was an immature mess around women, though, but they loved him anyways.  His wishy-washy two timing pissed me off.  Since he had a possibly terminal disease, I cut him some slack, but even a brain tumor didn’t rescue his personality.  I think I probably would have been happy with Boksu if I had not just fallen in love with the same actor playing Dr. Kkang.  He was flawless in Dr. Kkang.  Did my love for Dr. Kkang ruin my love for Boksu?  The probability is high.

Watch Dr. Kkang instead.   Watch Padam Padam if you want to see a man with cancer fall in love.  Watch… well, something else.  That’s my recommendation.

3 thoughts on “Review – Ruler of Your Own World”