A good summer drama with a lot of exciting action sequences, exotic locations, and hammy comedy.  It wasn’t perfect – and kinda tried to pack too many layers on its club sandwich, if you ask me, but I still had fun trying to eat it.  It’s not quite one genre or another, which I think was the only failing of this show – as I kept wanting it to lean left, into more exciting action/suspense, or just stay firmly right in the romantic comedy zone.  The constant shuffling between the two made me feel a little jet lagged.

Plotline:  A secret agent (played to perfection by Park Hae-Jin) goes undercover as a bodyguard to a goofy, middle aged actor (another ideal casting decision to choose Park Sung-Woong) – who, by the way, was hysterical – and gets romantically entangled with his over the top possessive female manager (Kim Min-Jung).  Missions to recover stolen artifacts, corrupt politicians, the extremely sexy Yeon Jeong-Hun, showbusiness shenanigans and more will entertain you for hours. 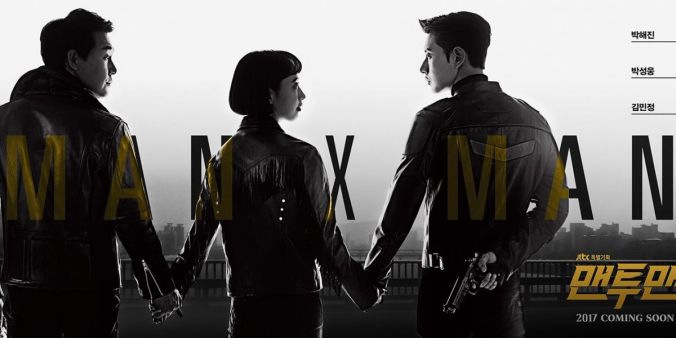 Sure, there are better shows.  But this one was fun trip with a huge cast of stars, tons of cameos, and… well… a little something of everything, really.  Unfortunately, that also meant it wasn’t a lot of one thing, which was ultimately its downfall.

*Quick Editor’s Note: Since posting this review, I have gone back to this show numerous times… and watched random episodes any time I wanted to laugh, enjoy Park Hae-Jin’s facial expressions, or just chill out and enjoy the show. It reminds me of Master’s Sun – in that you can just click on any random episode and have a good time watching it. Anyways, it’s 2021 now… and I’m going to have to bump up my viewer rating to reflect how fun this show is to rewatch.

Seriously, though, Park Hae-Jin’s facial expressions are the most enjoyable aspect of this show. Recently I reviewed Taxi Driver and said I didn’t think anyone else could pull off the action/comedy required for the main role, but thinking about it… Park Hae-Jin could have also nailed that role.