Stop the press!  This show gets the award for best use of books as decor.  Bookshelves galore – and all of them packed.  I’m talking… books, books, books!  Anyways, this was a fun and strange little drama about reincarnation and writers.  A group of independence fighters from the 1930’s end up reunited again in 2016… trying to solve the mystery of their past lives and their current situations.  Though I really liked this show, I thought it could have been better – so it’s not a perfect story.  But it’s such an unusual tale… with ghosts and shamans and snipers and book thieves and stalkers and quirky side characters… that it definitely stands out.

It’s no spoiler that all our characters had to die at some point to be reincarnated, and I’m not gonna lie… it was sentimental and gloriously patriotic and heartbreaking and awesome when it’s finally revealed at the end and I wept openly.  Before the tears, thankfully, there’s quite a bit of comedy and romance and screwball situations to amuse the viewing audience.  And did I mention mansions full of bookshelves?  It’s like the Beast’s castle, I swear.

For a drama about writers, I think they got a lot of things right.  Including the literary jokes (Stephen King references anyone?)!  Writing is tough.  My mother is a published author and it’s work, people… it’s not glamorous most of the time, it’s a lot of sitting in front of a computer typing until you’re fingers are numb.  And then doing the same thing the next day.  It’s deadlines and rewrites and editors and then, at some point, a finished product… followed by publicity tours which are also less glamorous than they seem.  Cause work is work.  And if writing is your profession, then it’s what you put 8 to 10 hours of you day into.  Just like other professions, 99% of the people in it aren’t amazingly successful and living in mansions filled with 40 foot bookshelves. 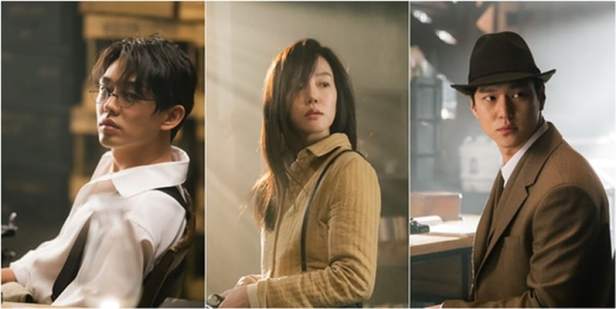 The three principal actors carried the show – drawing you into their past and present story lines with ease.  They all had a natural camaraderie that was believable.  Yoo Ah-In was perfectly cast as the neurotic, obsessive, serious author – he’s really quite a talent.  Ko Gyung-Pyo continues to shine by finding roles that are well suited for him – in other words, roles that don’t require too much besides a sensitive face and a calm demeanor.  Lim Soo-Jung, our wide eyed lady, was charming and a perfect balance between the two.  None of the side characters were interesting enough for me to bother writing about but all of them were fun enough that I was entertained by their presence.  Though it was great to see Yang Jin-sun playing the best friend/newly awakened shamen… I honestly think she’s leading lady material and hope she’ll get headline status again soon.

P.S.  It should be mentioned there is a few quality smooches in this drama… one with the same preamble used in Grease 2 “Let’s do it for our country!” and the other, my favorite, off a crowded street… meow!