Review – The King Loves / The King in Love

This drama was divine.  It took your basic love triangle and raised it up to levels of discomfort, pain and joy that I don’t recall ever experiencing in another drama.  Kings are always lonely, isolated people – by design – the people they can trust or count on are few and far between.  In this story, our King had one friend.  One.  So when they both fall in love with the same woman… cue the twenty hours of beautiful agony this show will provide.  I think what made this particular love triangle special was that our lady in the middle really loved both men.  She just happened to love one of them a little more…

Add to that some outstanding political intrigue – none of the boring filler that so often accompanies historical dramas – and brilliant side characters – and you’ve got yourself a historical drama that stands above others.  Let’s not forget how freakin’ sweet this show was!  So many sweet moments.  And tons of genuine humor, too.  There was a great mix of everything, honestly.  Gorgeous cinematography,  detailed costuming, and a complicated but tightly woven plotline that deeply satisfied.  Until the very end.  The very bitter end.  Cause… only one of these absolutely lovable men is getting the girl, after all.  And your heart is going to break for the other dude.  It wouldn’t have mattered which one.  That’s why this drama was amazing… it was a win-win and a lose-lose either way…

More musing on heartbreak, some spoilers, and character thoughts follow… let’s dive in.

I feel I should say for the record that though I generally hate narration in dramas – because it is often used as a crutch for writers who couldn’t figure out a way to convey  emotions in the drama itself and thus seek to let the audience know what was going on by tossing out some random monologues of characters – but that’s not the case here.  It worked beautifully in this show.  Why?  Maybe because it was used sparingly.  Maybe because it was a historical drama and these people didn’t run around psychoanalyzing their emotions and feelings like we do in modern times.  Maybe it was because it only added layers to the emotions and feelings we already understood to be true… giving us finer detail, a small touch of intimacy into the minds of these guarded and gorgeous creatures.  Maybe all the above.  Whatever.  It worked and I loved it.

Anyways, let’s start with the principle three.  Our love triangle.

First we have the King.  Like all kings, he’s raised sheltered (but not too sheltered) and spoiled (but not too spoiled).  Unlike many kings, however, he was given a small run of freedom in his youth.  Basically, he repeatedly snuck out of the palace and everyone turned a blind eye.  And so he had a bit more charisma, a bit more personality and chutzpah than the normal palace-raised royalty.  He’d played the role of commoner enough that he was able to find the “human” core of himself and become grounded in reality.  He’d experienced guilt and regret and seen real life.  The man had dimensions.  Adorable actor too – Siwan captured that spark of arrogance and innocence perfectly.  There’s something very thoughtful in this actor’s expressions, nuanced is the perfect word for it.  Only after I watched the drama did I realize it was the lead actor from Misaeng!  (which is a perfect 10/10 drama, in my opinion).

He also had an amazing, loyal best friend… who was very realistic to his role.  Yet the two could never really experience the full richness of friendship because of their different stations.  Bestie always had to keep a step behind.  He had to pull his punches.  He had to watch over his king.  He was 90% bestie and 10% servant.  But it suited him.  The youngest of three brothers, he wasn’t raised to expect the spotlight.  For him, his world was brightest when he was with the king, sharing in their adventures.  Bestie didn’t have the personality type to strive to be first, or he would have been miserable.  He was a born companion.  Again, great casting… Hong Jong-Hyun’s microexpressions held volumes of unspoken words.

Our lady was the daughter of a successful merchant whom fighting factions in the court had their eye on.  Why?  She was the key to the merchant’s loyalty, and most importantly, his wealth and assets.  So when a faction makes a move to “rescue” the young lass by staging an attack – and it all goes wrong – daddy sends his little girl off into the mountains.  To be raised by an alcoholic scholar whose pupils also learn martial arts.  And so she breaks free of her cage, though unwillingly, and finds herself running around without the many restrictions or traditional rules in the wild.  Our little actress was lovable from day one – not at all hard to believe both men would fall head over heels in love with this young, cheerful gal.  Yoona was perfect.

So… here’s our leading lady, the pretty Yoona, with two awesome dudes head over heels in love with her.   We have our future king, with his expressive face and his easy smile.  And we have our Besite… Hong Jong-Hyun… who is a somewhat odd looking fellow.  There’s something vaguely ethereal about him though… and it’s very compelling.  Mysterious boys are hard to resist, especially when they’re pulling you into corners and tossing you about rooftops in ninja attire under a starlit sky.   So even though I adored the king and thought his personality and humor were irresistible, the ever-protective smitten guard dog type of guy was also extremely appealing.  Decisions, decisions.  I have never had to choose between two awesome people in my life, so I only watched our lead female with envy while knowing I would have total sympathy with the loser in the deal… cause, unfortunately, I can relate to that deal of the cards all too well.

Anyways, these three were the real story.  Their friendship, that two of them shared, then the relationship all of them shared, and how it became ever increasingly strained by love…. as love has never been generous and generally prefers pairs to imperfect numbers.  The last five or six episodes of this show, as it’s clear who is pairing up – and only a matter of determining what the one left behind is going to do about it – those were the most powerful, in my opinion.  And it hurt.  It hurt to watch one best friend knowingly hurt another, but unable to stop himself… cause that’s love.  And it hurt to watch our lady have to choose, and find a way to break the heart of the other dude, cause no matter what she said or how she left it… when you’re in love like that, you can never be friends.  They were never friends in the first place.  She’s holding two people’s hands over a cliff and has to let one of them go… her heart has chosen who will survive this melodrama, now it’s just maneuvering.   I suppose, ideally, what you’re looking for is the least painful death.  You don’t want them to hate you, cause you already hate yourself and there’s a lot of selfishness inherently involved in love.  You don’t want them to be angry or vindictive, because you also realize they might seriously damage your new love with the other person if given enough life at the end.  You don’t want to give them enough strength to make a comeback, because even though you’ve made up your mind, you’re not entirely convinced you wouldn’t change it again.  So… you have to find the way to perfectly destroy them.  Politely.  Yet indifferently.  Sincerely.  Yet dismissively.  If you don’t see the blood pooling at their feet, you haven’t broken up properly.  And it took a while for this triangle to break up properly… cause our third party did not want to die.

The aging King, our future-king’s daddy, was excellent and complicated.  He did not have the solace of a friend.  Instead, he was surrounded by vipers who constantly twisted information or flat out lied to the man.  He started out a whip-cracking, wise-cracking force of nature but was eventually subdued by drugs and deception into a mound of confused flesh.  I was grateful he was able to come out of it, however.  How many stories have we seen where the ultimate destruction of the father is necessary for the rise of the son?  I was grateful we broke away from that trope in this show.

The Queen was equally fascinating and compelling.  A foreigner from a more powerful country, she’d been sent over at a young age to marry a middle aged King who already had a wife and grown child.  So much for her fairy tale wedding, eh?  Needless to say, she had a hard time finding happiness in this new world.  Only through her son and her trusted foreign advisers (Furatai!) did she seem to attain substance in this new world.  I love this actress and it was so nice to see her in full Queen attire… stunning.

The “Baddie.”  To be fair, there were a few baddies, but let’s talk about the Big Bad first cause he was delicious.  Just cool as a cucumber, practically floating around on his schemes and pleasant smile.  This guy was so strangely different from our usual “baddie”… and yet almost scarier because of it.  People were pawns to him – fascinating, disposable, pawns.  He was quite comfortable just sitting back and moving them around the board.  Creepy.  Sexy.  Smart and suave.  I loved this guy, even when he lost his freakin’ mind, he remained classy.

The evil ninja… who I was really, really cheerleading for there cause let’s face it, he had a break through with that girl he’d injured.  Of course, he screwed it all up, but that’s realistic to his character too.  But for at least a few episodes… the dude got to be a real human being for a few minutes.  And make a sad girl smile.  And smile himself.  I did not expect this at all – so when it happened…. wow… I loved it.  I would have actually preferred a little more of this character development – but whatever, that it happened at all was a pleasant surprise.

The snotty, simpering “2nd Brother” to our Bestie, who is eyeing the throne.  I love a character you love to hate.

And the little sister, who is in love with the future-king… despite the fact he doesn’t love her, doesn’t pretend to love her, and doesn’t make any promises to love her.  He’s civil to her… and you get the feeling over time he will be nice to her.  At least they were friends, eh?  It’s more than most royal marriages end up with, I suppose. 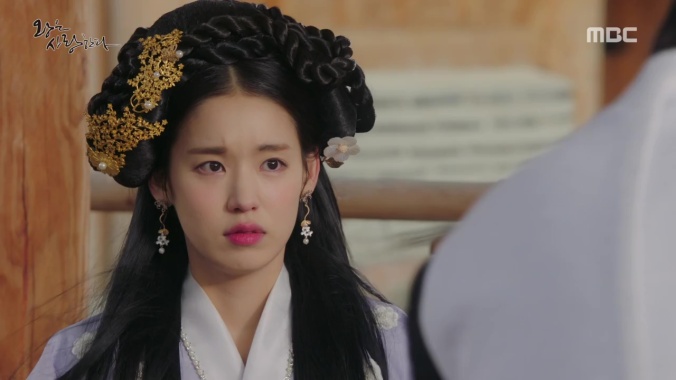 There’s so many other cool characters in this drama, but really… who cares.  It’s the lovers that will draw you in and keep you there.  If you aren’t interested in their story after a few episodes, then abandon ship… this isn’t for you.  But if you find yourself compelled, biting your nails, already sad and happy knowing what dreaded end awaits them and yet desperate to follow it through to that sad conclusion… continue on!  It’s amazing.  I adored it.