Jugglers was a mild drama.  By mild, I mean that the stakes weren’t very high professionally (something about who will get the VP position in a big company, a bit of sabotage and backstabbing, some very silly villains), personally (biggest back story obstacle we had was our lead male trying to overcome his phobia of other people and fire), and romantically (dating your boss was the theme of this show… which, naturally, has its problems).  Even though it wasn’t a long show, only 16 episodes, it felt long.  To me, at least.  I honestly wasn’t charmed enough by any of the characters or compelled enough by the plot to deeply invest… so I skimmed quite a bit towards the end.

That said, it’s really a very cute little show.  If you go into it with low expectations, you’ll probably have a lot of fun.  The lead female is feisty and silly.  When her boss moves into her house, becoming her tenant, she has fun with the power reversal – and it’s fun for us, as viewers, to see the home life of these suits and secretaries.  The lead male, her boss, is lovably grumpy, awkward, and nerdy… quoting anime and manga, flipping the bird at people when he’s adjusting his glasses, bluntly rejecting anyone’s attempt to befriend him.  Naturally we all wanted to see this dude fall in love and smile.  Considering our lead female turns into a manga shojo character when she’s smitten, acting silly and cutesy and overtly flirty, it’s actually kinda perfect.  I half expected hearts to come out of her eyes, or little cat ears to appear. 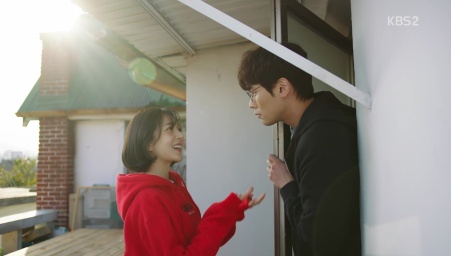 Rounding off the romance, we have office politics – including a side romance (sorta) between a housewife-turned-secretary and a ridiculous man-child with a high paying job.  They actually saved this drama for me, as I found their story line to be surprisingly endearing and sweet.

We also have another man-child, the ridiculous “villain” who basically runs around laughing awkwardly and doing victory dances, or frustration dances, or… just dancing.  His character was extremely physical – again, a lot like a manga villain… more silly than menacing.  I found him amusing.  As well as his long-suffering secretary who had to put up with his insanity.

So, Jugglers was kinda cute.  It had its merits.  But honestly, there are so many k-dramas that cover this same ground that are better.

Overall Rating – 6.5/10.  Goofy Men in Power and the High Heeled Women Who Take Care of Their Messes.

One thought on “Review – Jugglers”