I remember the first time I ran across one of the pictures from Kolmanskop, a German diamond mining town in Namibia, Africa. The pale faded paint of the walls, the sturdy frames of the doors, and the mounds of sand that had gently, but fatally, invaded the homes. It was haunting. Mysterious. Two worlds that are generally separate, collided.

It’s what drew me to the book The Elementals by Michael McDowell. The story of a haunted mansion slowly being overtaken by sand… by the elements… by the Elementals. I ordered a reprint and sat down to read this tale, set in the American Deep South, expecting a quick read. It’s a relatively thin book, after all. Instead, I found myself wading through a story that took me a few weeks to finish. I would read a bit, and sit it down… almost exhausted by the effort. Not that it wasn’t good – in fact, it was too good.

This book is a classic Southern gothic tale, complete with decaying mansions, thick summer heat, and generations of secrets.  The descriptions were spot on, especially when the author sought to capture that lazy, lull of summers in hot climates. The mind-numbing pleasantness of just lounging around in swimsuits on sandy towels, napping in rockers on front porches, whittling away at a puzzle on a table somewhere in the house at night while your family members are spread out… reading, napping, talking quietly. The hours lose meaning. Daylight and not daylight. You rearrange your schedule to fight against the hottest time of the day.

Written in the early 80s, this book is a glimpse into the past. Of gentility and vanity and denials. Of the gay son that no one ever, ever, not once, acknowledges as gay (even the author) though everyone, and I mean everyone, knows full well he is. Of the alcoholics that are doted on, of the affairs that are ignored, of the weak willed gentle natures of men who have grown up under domineering women. It’s a story about loyalty and family and how that never really looks like we’re taught it does.

And, of course, it’s a story about the supernatural. The unknown that is never knowable, no matter how thickly you drape religion over it or decorate it with superstitions. Some things can not be known.

Of everything in this story, that was what struck me most: The strange acceptance of and blindness to the unknown. There are three mansions hidden away off the Gulf Coast in Alabama, cut off from the world inside miles of private property between the oceans and lagoons. Each historic mansion is facing in a different direction, all three identical. Except one of them is being slowly overtaken by a dune of sand and for years the house has been empty, abandoned by its owners. A source of suspicion and sometimes terror, the two families that own the other homes do not approach it, even though it stands between them, visible from the windows of their home. They pass it every day. They live with it. And yet they just pretend like it isn’t there most days. It’s there and they do not wish to acknowledge it. They don’t even investigate who owns it, they’ve just accepted its strange and ominous presence in their lives. Just like the family alcoholics, the cheating spouses, the homosexual children, and any other issue they don’t want to address. It is ignored. A Victorian mansion sized elephant in the yard. 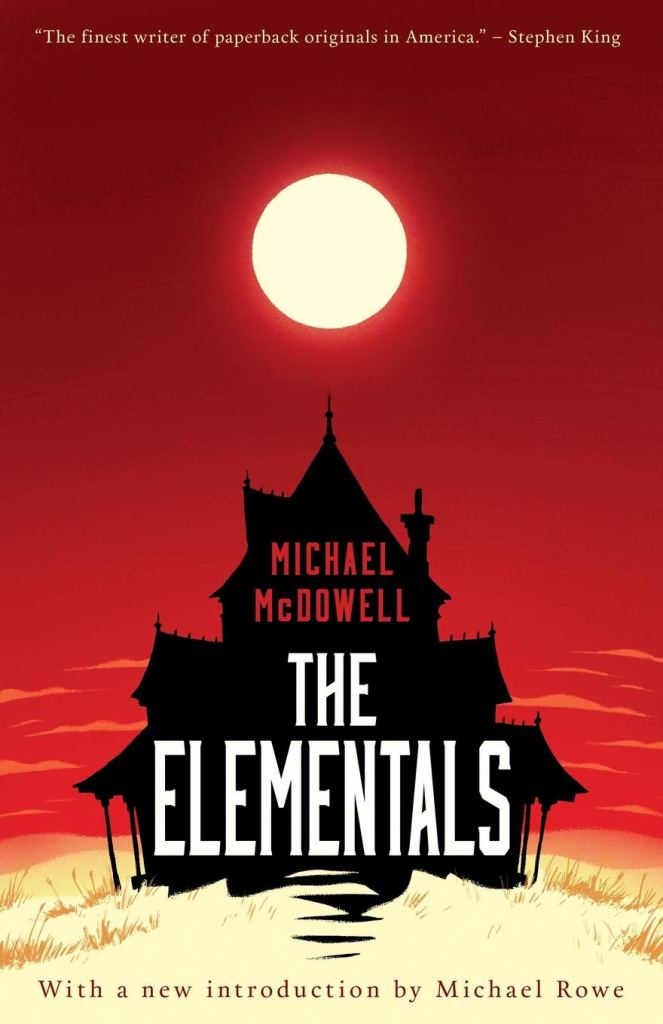 This story is very, very Southern. In the Deep South, in the 80s, you could call a woman Big Barbara as a term of endearment. The dialects, the traditions, the strange and fluctuating social rules of Southern families are captured to perfection in this book. And yes, through the modern lens you can definitely read the homophobia, the racism, and the patriarchy seeping through the pages – though I honestly do not believe the author meant to include them as such. You live in the times you live in. How the future will judge you for that… well, I’m sure the author would be curious to know. But he died before the turn of the 21st Century.

Michael McDowell. Screenwriter of Beetlejuice and the Nightmare Before Christmas. He wrote a few episodes for Tales from the Darkside and the script for Thinner. Born in 1950 and raised in Alabama, he went off to Harvard to earn his bachelor’s and master’s degrees.  He seems to have stuck with his Southern roots and based most of his novels and short stories there before succumbing to an AIDS-related illness in 1999.

What was your life like, Michael? I kept wondering that, even as I was drawn into the story he’d written. Who is the man behind the words?

“Savage mothers eat their children up!”

There is a coldness mixed in with the love in this novel. Children are left to fend for themselves, despite how well meaning their parents are. They grow up quickly. They take their secrets with them, to New York, to nunneries. They face horrors alone.

I highly recommend this novel, especially as a glimpse into Southern culture in the mid-20th Century. It’s also a really creepy read with some genuinely terrifying scenes. The ambiance of horror lingers in the shadows of every page. The Elementals, and their connection to the two families, are lost in time… buried in history, just like the third house. How much does anyone really know about their grandparents? About their great-great grandparents? About the ones before them?

We pass the torch. Some things change, other things linger. There are good days and bad days. And through it all, things we don’t want to know… and things we can’t know.