Come & Hug Me. What should have been a 10/10 winner – combining psychopathic serial killers, star-crossed lovers, fractured families, societal judgement, and a thrilling story of cat and mouse… barely made it to 7.5/10 due to its excessive use of unnecessary flashbacks, painfully long sequences of staring and slowly rotating cameras, faulty dialogue (and lack thereof), and jarring tonal shifts. Let us all examine this tarnished show as what happens when editing goes wrong. 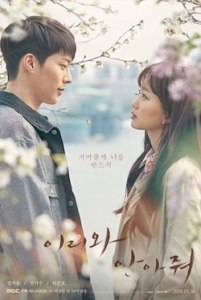 Which poster most accurately represents Come & Hug Me? Unfortunately, they both do… and that’s a problem.

Korean dramas have mastered the art of blending genres – especially when it comes to mixing dark plotlines with beautiful romances. Think of Pinocchio, for example. This is a masterpiece of blended genres – adorable, genuine romance – gritty, urban crime – melodramatic, dark pasts coming to light – and an unflinching commentary of modern society. It had a large cast and plenty of subplots and characters to follow around and not a wasted minute in the entire show. There are also dramas like Just Between Lovers, that kept everything close to the main couple and focused heavily on their inner turmoil, tortured pasts, and slow healing from severe trauma. I Remember You has not one, not two, but three serial killers, a boat load of family trouble, and a whole mess of relational, dark plotlines and it still gave us a swoon worthy romance. These were tightly paced, well plotted shows worth every award and accolade given to them.

So it can be done, this contrast of light and dark. It has been done. Come & Hug Me just didn’t manage to do it and that’s a shame. It felt like a significant chunk of the writers quit halfway through the project. Or maybe the studio said, “I love this 12 episode drama – let’s make it 32 episodes!” and then tossed it to an editing crew to pull on it like taffy. There were sooo many spaces that just felt empty, drawn out, padded, and needlessly prolonged. Every character in it could have used additional development – there were plenty to choose from, too. It would have been easy to tighten this drama into a finely crafted show. Instead, it just unspooled into a mess on the floor.

The plotline of Come & Hug Me is amazing, though, and thus despite its many editorial flaws and awkwardness, it’s impossible to deny the plot is pure melodrama. It’s a blood soaked cocktail of murder and romance and that just so happens to be my favorite drink… so let’s discuss…

A young boy and girl develop a powerful friendship with all the makings of true love. The young actors are beautiful and genuine, and the world is fluffy blanket of white petals and soft sunshine.

She is the daughter of a successful celebrity, coming from a wealthy, loving household. He, on the other hand, is the son of a psychotic serial killer who lives in a house of horrors and tension. Psycho-daddy is none too pleased that this young beauty has stepped into the picture, right when he’s busy trying to mold his son into a monster.  So he does what all pure nutters do: decides to massacre her entire family.

WITH A FREAKIN’ HAMMER. 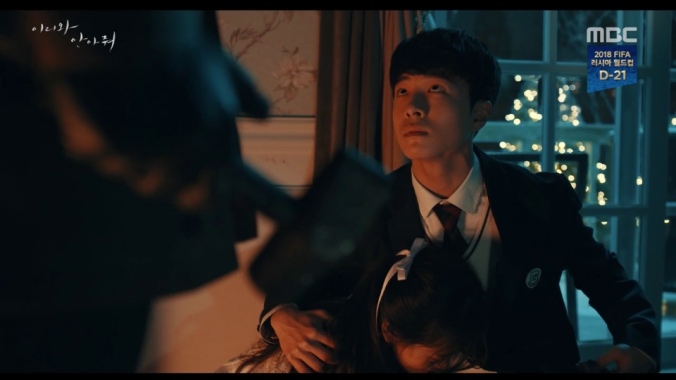 Our young hero is able to stop his father from killing his girlfriend… but the damage is done. Her family is dead. His family is screwed. Their worlds are shattered.

After that fateful night, they are separated and both grow up on their different paths.

He, attempting to absolve himself of the familial guilt and shame, becoming a police officer, determined to prove that the evil of his father is not, as many suspect (and as his father so desperately wishes), a part of him as well. People hate him. They hate his whole family. They shun them and blame them and openly despise them. It’s the burden the family of the killer share. I mean, collective punishment is a huge part of Korean history. Just think of all those historical dramas we’ve seen. When someone was punished – their entire family, sometimes extending out a few generations, went down with them. Even though this practice is long gone, it’s implications linger.

Our orphaned girl grows up, too. She struggles with PTSD and the trauma of losing her family to such a violent act. Determined to live her life in honor of the dead, she maintains a happy facade and diligently strives to forge her path in her chosen career. Though she is kind and smiles easily, there is a fragility in her eyes that hints at the damage hiding in her past.

And of course they meet again.

And of course they’re both so gorgeous it almost hurts to look at them sometimes, the sweet, fawning, tormented fools they both are.

And of course they’re still madly in love.

The bond from childhood is undiminished. Arguably, their shared trauma has only made it stronger. But the stigma of their relationship… dating the man whose father murdered your entire family? That’s quite an obstacle, both from their own perspectives and the outside world’s. So there will be lots of soulful pining and quiet distance and pained, lingering glances. But that won’t keep them apart, cause someone seems to be threatening her again – promising to finish the job our hero’s father started.  And yeah… of course, he’s gotta be the one to protect her. Obviously. I mean, there’s no conflict of interest there. He’s the clear and logical choice, right? Right.

Oh, melodramas! You don’t need no stinkin’ logic.  Oh, I love you so.

There’s all kinds of family drama, too. The extended families of both our main characters are all struggling in one way or another, just… tortured, the lot of them. I loved them all – the whole complicated, horrible, many-shades-of-gray mess that they created.

I mean… how awesome is this plot?

I love tortured romances and hideous, complicated criminal families. It’s freakin’ perfection. If only they hadn’t murdered it in execution!  These are the dramas that dig at me – the near misses – the ones that shoulda coulda woulda but DID NOT.  They just get under my skin and fester and cause me to curse and tear my hair out. Cause dark dramas featuring broken people that find love are my all time favorites. It’s my niche.  But someone watered this sucker down and it just leaves me craving and raving and mad.

So let’s rant together (and secretly write a fan letter or two)!

Why do I love it even though I hate it?

Well, because of the epic plotline, as I just mentioned.

AND BECAUSE CHANG KI-YONG IS AWESOME.

He was perfectly cast in this show. He can pull off those long, smitten puppy dog stares that melt hearts. And he can switch to a scary, violent bastard in .02 seconds and it’s brilliant, powerful acting that deserves our attention.

It’s terrifying, honestly. You do not have to stretch your imagination to imagine him killing someone in anger. He can teeter on that line of someone who could believably SNAP… so he owned this character. It was almost like it was written with him in mind (if you’ve seen My Mister, you have to wonder…).

In My Mister, there are many long shots of silence or thoughtful lingering. And yet they all advance the plot. They develop characters. These slow moments are nuanced. And every one of them mattered.

That’s the difference between a well-crafted drama and whatever happened to this show.

Let’s talk about the girl. I mean, she is THE girl. Another perfect choice of casting. Jin Ki-Joo is the definition of fragile beauty. If ever an actress gave off the damsel in distress vibe, it’s this little lady. It’s like she was born to be rescued.

AND JIN KI-JOO MUST BE HAPPY OR THE WORLD IS GARBAGE.

And after all she’s been through – your entire soul demands that she find happiness. From the second they reunite (him in his uniform, she in her peasants outfit), it’s clear that the murderer’s son is the white knight who will be responsible for her heart.

And Jin Ki-Joo and Chang Ki-Yong have amazing chemistry. Those two were obviously smitten with each other. You could tell they just really, really could not believe how lucky they were to be paid to stare at each other for hours and hours every day.

I’ll confess, even though the pacing was driving me insane – they were consistently adorable. Sappy, puppy-love, bonkers cute.  It was so over the top, it should have been annoying if it didn’t feel so damned genuine. Did these two really hook up? Cause these young lovebirds made me feel like cutting out heart shapes in red and pink construction paper and plastering them around the border of my television.

It’s villainous characters coming in and out of focus to give our two smitten kittens an excuse to cuddle up against each other. You know, for protection. From the, uh… bad… cause… ohhhh look at his pretty eyebrows…  Awww….

wait, what was I saying?

Whatever. It’s good. Watch it. It’s not perfect – far from it – but it’s got something. Just not enough.