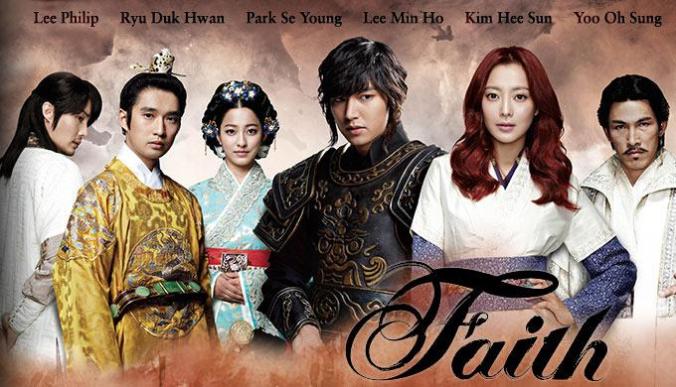 There are few historical dramas with an interesting female lead… whose interest goes beyond “I want to rule” or something generic like that.  But the lead female in Faith is by far the most interesting character in the show – and she’s interesting for lots of reasons.  The girl wants TONS of things – cause the world is full of possibilities and she’s crafty and resourceful and full of life and energy.  And she’s not the only one!  No, no, no, my fine friends, there are a multitude of interesting ladies in this show.  In fact, the ladies are JUST AS INTERESTING AS THE MEN!  Gasp!  Equal representation in a historical drama?  Be still my feminist heart.  This show has ladies with humor, personality, individuality, sexuality, and self interest.  Heck, there are even female guards in this show.  It’s awesome.

Faith is a show that knows its strengths and weaknesses and plays both correctly.   It doesn’t have great action, but it will distract you with a handsome lead.  Heck, they even let him get away with abandoning the top knot in favor of a fan favorite bangs.  There isn’t too much political tension, but there’s fun characters.  Loads of them.  Faith is a fish out of water via time travel story… as well as your basic “kings trying to keep their thrones while their court plots against them” story.  There are fantasy elements, people with special powers, magical portals to different times… but that’s about the extent of it.  It’s a bit long, a bit cheesy, a bit under dramatic for something that should be more dramatic, and definitely light on the action (for my taste – I prefer much more sword play!).  The romance is PG at best.  Yet it was still extremely enjoyable just for having so many refreshing elements and unique characters!  If only we could have such well written characters in other historical shows, eh?  To dream!

Overall Rating 7.5/10.  Lee Min Ho Looks Cool With A Sword Even If He Doesn’t Know How To Use It.

Lee Min Ho is a horrible action star.  I honestly don’t know why they keep casting him in for these roles.  He’s not a bad actor, necessarily.  He’s just not a convincing action hero.  He seems… slow.  But not graceful slow like a ballet dancer… just kinda regular person slow.  Regular tall person, that is.  It suffices.  It’s not painful or anything, but it’s also not great.  They were wise in their editing of this show – and the use of cartoons and distracting plumes of smoke and crackling lightning… because otherwise I think it would have been more noticeable.  With that said, I liked him in this show.  I might have chosen someone else if I were involved in casting, but he still did a good job.  The hair, in particular, was fabulous.  How did he convince the crew to get him out of the top knot wig?  The awkward mix of carefree and serious works with him.  The sensitivity, too.  Sure, the whole thing felt a little cartoonish, but it WAS a little cartoonish.  I mean, the guy could shoot lightning out of his hands (briefly, but then it suddenly went away without explanation early in the program?)… that’s the kind of show it was.  It worked. 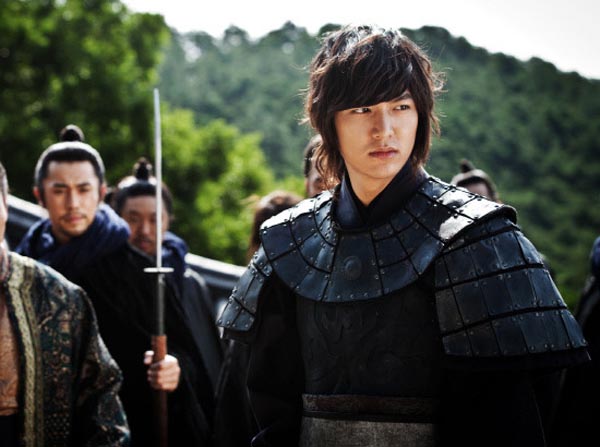 Side Note:  I loved that he picked up a police shield from the future and kept that with him for the first small part of the show.  I wish he’d had it the entire show, much like his powers… because honestly, the action of this series was much cooler the first few episodes when he wielding lightning and using a police shield to block swords and supernatural powers. 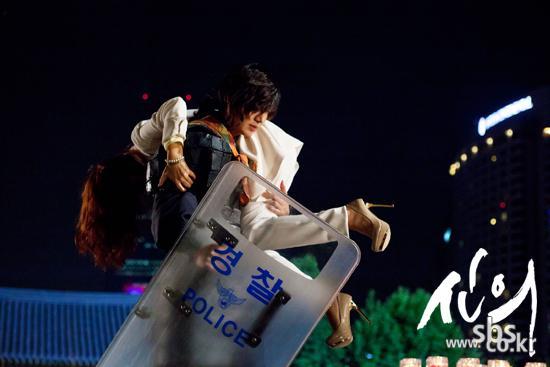 As a character – the great swordsman searching for meaning in life is a timeless tale.  Raised with bonded brothers who found themselves betrayed.  Tossed from king to king to king, losing hope in the ideals of his teacher, of his country, of his faith.  Helping mold the new young king into a strong ruler while simultaneously feeling the burden of taking human life grow heavier was a fascinating story line.  I will pretend that is what the writer’s were trying to do with this character – turn him from a god to a man… cause otherwise, I’m not sure why they had his powers disappear.  In the first episode, he is an unstoppable killing machine with incredible god-like powers who will do whatever asked without question.  By the end of the show, he has no powers, questions almost every command, and has no desire to kill.  Quite an arc.  Let’s assume they meant to do that.

Heaven’s Doctor, or God’s Doctor.  She was awesome, from start to finish.  Just a plucky little ball of spunk.   This is technically a “Noona” romance, since she was 10 years older than her soldier boy, but it didn’t feel awkward in the least.  They were already so different and everything was so skewed due to the time traveling that it didn’t seem strange.  And let’s face it… the modern age lets us stay child-like longer whereas the olden days turned you into an adult before you hit your 20s.

I was pleased that she didn’t accept her time travel for several episodes, because that was realistic in my opinion.  You don’t just calmly accept time travel – unless it’s obvious, like going from the past to the future.  Anyways, the doctor was delightful.  Hugging the queen, scheming to start a beauty pyramid scheme business, teaching people “heaven’s language” and goofing around.  Always hiding her insecurities behind playfulness.  I adored her.  If only more female characters were this well written and well rounded.  Poisoning her TWICE was a bit tedious, though, but whatever.

The Queen was also outstanding.  Her love story with her short, insecure husband was the secret highlight of the program.  How adorable were they?  Watching them fall in love with each other and find strength in each other was magical.

Faith also knows the power of a cheesy montage.  When your romantic couple really hasn’t had a lot of “romantic” moments… a montage can save the day.  Because just about anything can seem romantic if you play it back in slow motion with a sappy love song accompanying it.  A quick touch of the hand becomes a prolonged embrace, a meeting of the eyes turns into a searing soulful connection… oh, the rose tinted glasses of our memories, eh?  In this way, through repeated and plentiful montages, Faith convinced me that the lead couple was falling in love.  That perhaps they already were in love… that maybe they’d fallen in love a few episodes ago and I just hadn’t been paying attention.  Darn my eyes!  Where are my pink glasses?  Cue the montage!

The villains were great.  They all had understandable motivations.  They had panache.  They had style.  They had personality and flair and individuality.   Yu Oh-Seong as the cold handed Ki Cheol in particular.  With the black hole in his heart?  The yearning for more?  Could there be a more intriguing anti-hero?  I loved him! 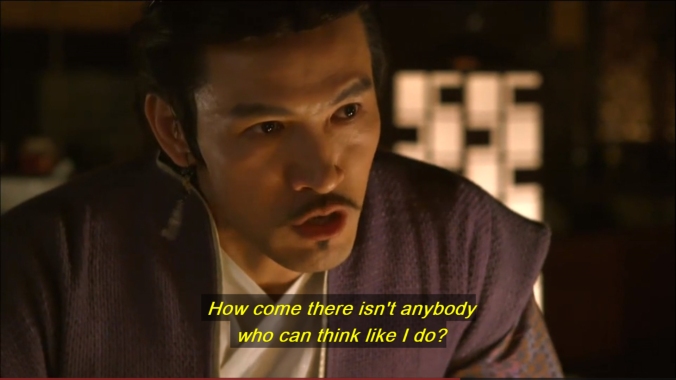 Ki Cheol wants everything.  He wants the secrets of the future.  He envisions true power in the knowledge he could gain from going to Heaven… and he’s not wrong.  There really wasn’t anyone he could communicate with… he was better suited to the future, ironically.  He was like Lex Luther in Batman.  He had ambition and an eagerness to him… it was unfathomable to him why the people around him did not seem to want more.  Why was he always alone in his desires?  When he gave his closest crew the options to go to Heaven with him and everyone turned him down left and right, he just couldn’t believe it.  Who wouldn’t want to go to Heaven?! 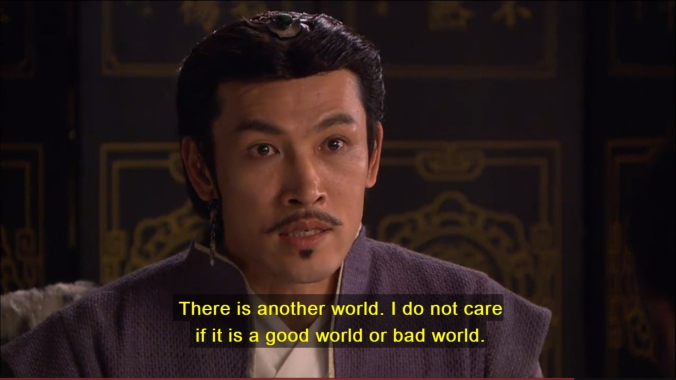 I loved him.  The first few episodes I wasn’t sold, but over the course of the show I think he became my favorite male character due to his diversity and personality.  He was so self aware, too.  He even knew he was going crazy!  He knew he only wanted things because they were denied him.  He knew he he was prone to chase rainbows and still he ran after them… he was kind of romantic in his pursuit of the unattainable.

His siblings were equally fun to watch – the fiery temptress and the sullen fluted killer.  AND they used their powers.  Often.  I was grateful that they remained consistently fantastical throughout the program, to the bitter end.

I also enjoyed the pathology of the would-be-king.  Our poisoner.  I loved how blatant he was.  “You mean how everyone wants to put me on the throne?  What?  I’m supposed to pretend like I don’t know that?”  He was hysterical and sly.  Vain, pompous, and purely in it for the glory of power.  I thought it was equally hysterical that he had painted another version of himself in his mind, as this demure regal ruler… which is NOT at all what he was like, but he seemed convinced.

He says the above, about reading, after his plans have all been sabotaged and he’s about to be captured.  What a joke.  He never read books!  He played Go and hung out with hookers all the time.  But I thought it was such nice story telling, to have that aspect of him revealed… his self delusions.  What a twisted, twisted bad guy.

All the side characters were enjoyable.  The doctors and mute assistants and soldiers and aunts and street fighters.  Loved the random tall gay fighter… who openly flirted with all the handsome soldiers and kicked ass fighting.  Yay! 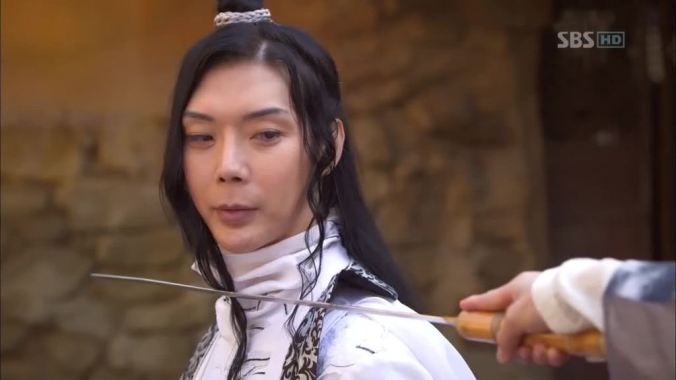 Faith was cute.  It’s a good summer show.  Light weight.  Like a paper back book.  Just an enjoyable, fun throw away story you can get into but easily toss aside once its over.