He is Psychometric is half romance, half murder-mystery. Korean dramas are especially talented at mixing dark subject matter with light humor and adorable romance. The lead actor in this series, played by Jin Young, is psychometric – which is the ability to see the memories of people and, baffling, objects. He gained this strange ability after a childhood tragedy that claimed the lives of both of his parents. I’m unfamiliar with Jin Young, but must admit he was a strong enough actor to carry the leading role. His smile is infectious, and he had great chemistry with both his adopted older brother and his love interest. 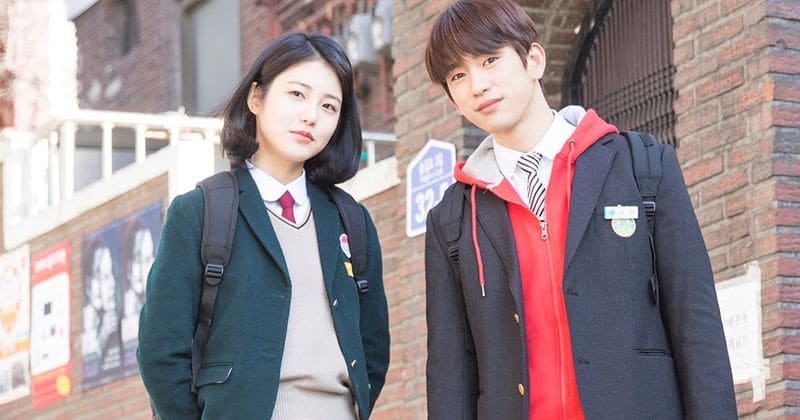 His love interest is played by Shin Ye-Eun, a whipsmart young woman whose life was also altered forever by a childhood tragedy. The same tragedy (obviously) that took the life of our psychometric’s parents. She’s smart and he’s dumb. She’s a hard worker and he’s a bit of a lazy screw up. She’s serious and he’s carefree. They were an adorable odd couple that really warmed my heart and I loved watching them fall for each other.

The side characters were memorable and enjoyable to watch. Though a bit heavy handed with characterization, I still enjoyed following the lives of all the friends, family, and coworkers that inhabited this story. In particular, the determined female cop played by Kim Da-Som who acts as both a role model and older sister to the young couple. In many ways, this lady stole the show as she seemed to be the most capable actor in the series – and thus naturally inhabiting her role.

He is Psychometric follows the recent trend of dramas that would have been stellar had they been about 10-12 episodes instead of 16 – or if they’d developed side characters further to fill out the gaps in the script.  Even in the first episode there was an unnecessary amount of flashbacks to things that literally happened only a few minutes before. There isn’t a great deal of tension trying to figure out “who did it,” due to some heavy handed visual clues and tropes – though perhaps if you haven’t seen a billion dramas like me this may not be as obvious. Had the last four to six episodes been condensed to one or two, this might have stood up better to other dark themed dramas with soft cores, such as Pinocchio, While You Were Sleeping, or Hello Monster. As it is, the last few episodes dragged around long after the initial excitement and tension had  faded. Still, I enjoyed it overall.

Overall Rating – 8/10.  An Average Tale About A Supernatural Ability.

3 thoughts on “Review – He Is Psychometric”