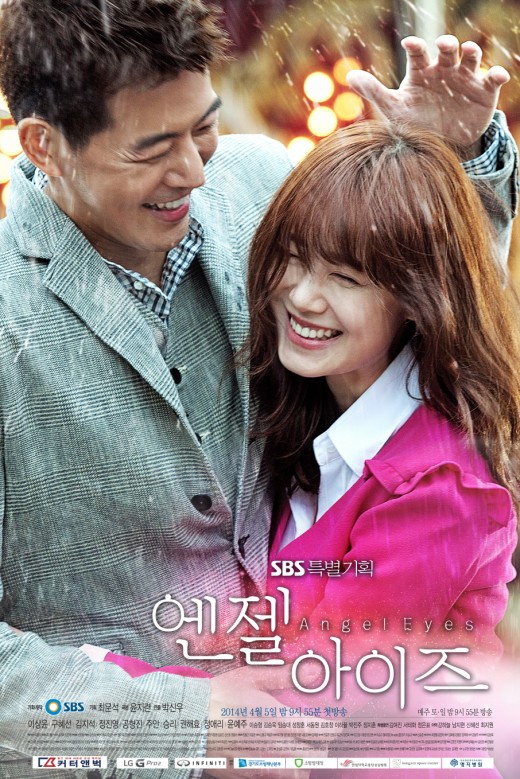 A perfect, classic romantic melodrama!  I say classic in that it got everything right – the pacing, the tropes, the love triangles, the side characters, the mysteries, the music (was stellar, great soundtrack), and the sigh inducing love story.  Just…  Achingly romantic story of first love… overcoming an obscene amount of obstacles – just thrown at them one by one.  Oh, the drama!  Oh, the tears!  Oh, the ridiculous joyously fun circles of coincidence and fate and connections.  God, I love melodramas.  It’s my favorite genre, so when I find a great melodrama it’s like a gift addressed to me.  Romantic melodramas are my favorite of course, because then you have the painful separations, the smoldering, the aching between two people as they are yanked apart over and over.  Sigh.  I ate that mess up.  Plus this drama balanced out all the sadness with lots of light hearted moments, comedy, exciting work stories, side stories, and more.  It was so well rounded!  I adored it!

This drama had two attractive leads:  Lee Sang Yoon was mesmerizing as the die hard for love… it was impossible not to fall head over heels in love with this guy… and Gu Hye Sun was adorable, plucky, and proved she could also bring it to the melodrama table with some outstanding emotional performances.  I also loved the teen versions of these two, whose story took place in the first two episodes.  Kang Ha-Neul and Nam Ji-Hyun were sooo cute together.

Overall Rating – 10/10.  Organ Donors Are Confidential For A Reason.

Oh my god, this show, right?  This show!

Let’s just start at the beginning.  The first two episodes…. the Teen Years.  Could I love a lead a couple more?  NO.  It’s not possible.  The dutiful, big smiling, high academic achieving, super smitten boy who is falls hopeless in love with the mysterious young lady he spies on while delivering porridge every morning.  And why does he love her?  Because she’s a cutie, for one, and because she stands outside and narrates the stars.  He’s been watching her do this for so long, he actually has her entire speech down and mumbles along with her as she goes through the constellations.  My heart melted.

Later he learns she’s memorized this speech because she is the guide at the local observatory and narrates the big laser light show.  He attempts to approach her, but she seemingly blows him off.  He realizes eventually that his star gazing sweetheart is actually blind…

And then we have one of those awesome K-Drama scenes that just defines K-Dramas.  She is being harassed by some teenage boys at the observatory and he comes to her defense.  Only she doesn’t want his help, thank you.  She angrily tells him she doesn’t need to be protected – that he has no idea how hard she’s worked or what her life is like.  He can’t just sweep in and expect her to exit stage left on something that is so important to her just because some dumb boys were messing with her.  Well, our adorable nerdy boy is furious at her and storms off in a rage.  But in the next scene… we see him tying a bandanna over his eyes and trying to walk through the crowded streets blind.  He bumps into people, he falls over, he feels scared and frustrated and confused, but he just keeps going.  And then he crawls back to our blind girl, tears in his eyes, full of heart felt apologies after having only briefly experiencing her world… he falls on his knees and cries on her lap and begs to be forgiven his arrogance.  Gah!  K-Dramas… only in K-Dramas.

As if this isn’t enough to choke you up forever, it’s followed by a series of equally sweet moments.  He puts her on a bike and carefully watches over her while she blindly steers into the wind.  He reads to her.  They watch movies together with that adorable awkwardness of young lovers.  They share a first kiss.  He brings her home and lets his charming family adopt this lonely girl.  Her serious face starts to shine with bright smiles and laughter as they fall in love.  It’s sooo freakin’ cute.  I mean… geesh… what a great start to a series.

And of course, since it’s a melodrama, by the end of episode two everything goes horribly wrong in a big ball of sadness.  Separating our young couple.  Our blind girl gets an operation and is able to see… only to wake up to find her boyfriend and his family gone, vanished without a trace.  She is devastated… where did they go?  How could they just leave her overnight, without a word?  For twelve years she has no answer…

As viewers, we know the answer.  Our adorable super nerd’s mom was in a bicycle accident, a hit and run, and rushed to the emergency room.  While still in critical condition, but expected to recover, she signs organ donation papers – giving her eyes to her newly adopted blind “daughter” – just in case something goes wrong.  Her son listens to her request to keep this donation a secret… just before she is rushed to surgery.  The surgery goes well.  She is recovering without complication… until suddenly… a complication!  Mom dies, leaving super nerd orphaned with his young sister.  Due to this sudden event, he and his sister are whisked off to America by a relative.  Super nerd leaves behind a letter to his girlfriend explaining everything.  He calls her, he writes her, over and over… but she never replies.  Why?

Cause… of daddy.  Blind girl’s father is a surgeon.  After the loss of his wife, he was an alcoholic mess of grief.  He had basically abandoned his daughter and was living in his office at the hospital.  Despair had ruined him.  When he saw that a woman had listed his daughter, specifically, for receiving her eyes should she die… a horrible temptation overcame him.  He struggled through the operation – he did his very best.  But then… when she was recovering and alone… a dark moment over took him and removed her oxygen mask while she was in critical condition, stepping away.  It was only a moment, but it was enough.  He realizes in horror what he’s doing and immediately tries to revive the woman, but it is too late.  She’s dead.

Her son, our super nerd, witnesses the doctor furiously trying to revive his mother and mistakes it for a passionate attempt to save a life.  Which it is… but under a different context.  He thanks the doctor profusely.  To the doctor’s horror, he finds out this young man is his daughter’s boyfriend… and they are in love.  Clearly that would never work out, right?  Cause… I just killed this kid’s mom.  So, the doctor hides the letter the boy left, hides her cell phone, sends back every letter the kid writes and basically does his best to make sure she never thinks of him again.  (never gonna happen, dad)

Except he can’t stop thinking of the super adorable nerd either.  Haunted by his guilt, he goes to America to check on the young orphan.  A strange compassion overtakes him, and he ends up befriending this boy.  He helps him through school. Through college.  Through medical school.  They become like father and son.  And you can tell that the doctor truly loves this kid…

Park Dong Joo.  Oh my gosh.  What a character!  And the actor playing him was awesome.  Those dimples!  Park Dong Joo, now a talented surgeon, brings his butt back to Korea after twelve long years… why?  To find his blind star-gazing honey, of course.  Even though she hasn’t spoken to him in twelve years, he has never been able to forget about her.  To his surprise, he finds her pretty quickly… cause our young miss is now a plucky paramedic, running in and out of the hospital he works at all the time.

Enter amazing K-Drama Moment Number 2.  The “Is She Married?” Scene.   By this point, I’m already in love with the big smiling adult version of Park Dong Joo.  But if there were any suspicions about whether or not I would love him for eighteen more episodes, this scene cast those doubts aside.  Park Dong Joo has tracked down his lady love to the EMT station and is watching her hose down a firetruck.  He’s grinning like a fool.  His girl can see!  She can see!  He’s so stupidly happy he looks like he might float up into the sky.  And then… a little boy runs up to her and she starts to play with him.  His smile waivers.  Wait, he thinks… who is that?  Then a man joins them.  They all play together, so at ease, the perfect picture of a happy family.  His smile completely vanishes and you can see the pain and regret all of his face… oh my god… it’s heartbreaking.  Cause you can tell he’s still happy for her but also just devastated by this sight before him.   Oh, this scene!  Sigh.  The man and the little boy wander off and he overhears them talking… about how she’s not as pretty as the little boy’s mom.  And bam!  That smile comes right back!  Heaven to Hell and back to Heaven!  He prances over to her like a happy school kid, just shining like the sun… and she looks at his face for the first time ever, not knowing who he is.  And he looks down at her with that huge smile of his and it’s just… geesh.  K-dramas!

They are the CUTEST EVER.  Cutest as kids. 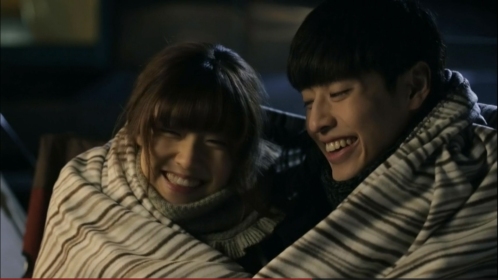 And even as grown ups.  Just so cute…

Of course, half the show they are miserable as hell.  But at least 50 percent of the time they are happy in love… so it’s a nice balance.  The road to joy is basically an obstacle course for these two.

Obstacle 1:  She doesn’t know who our surgeon is.

Obstacle 2:  Neither of them know why the other broke off contact 12 years ago.

Obstacle 3:  She has a boyfriend.  And he’s really, really nice.

Obstacle 4:  Her dad does not approve of the relationship.

Obstacle 5:  She doesn’t know who her eye donor was.

Obstacle 6:  Her dad killed his mom.  Shit.  That’s a biggie.  Neither of them know – they will find out at different times.

Obstacle 7:  A secret conspiracy no one is really aware of that comes into play.